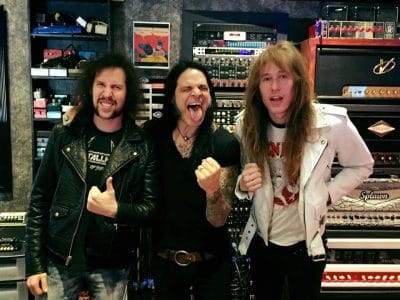 Nashville, Tennessee, USA hard rockers Denman are hard at work on their debut full-length studio album with renowned producer Michael Wagener handling the production duties. Denman had Mark Slaughter provide guest vocals for their song “Miles Away From Home’ on their debut EP The Life We Live. This time around, Denman will have none other than long-time Alice Cooper bassist and Beastö Blancö singer Chuck Garric provide guest vocals on their upcoming album.

“Had a great time today with Chuck Garric of (Alice Cooper, Beasto Blanco) in the studio. He’s our guest vocalist on the new record!”

Sleaze Roxx stated the following in its review of The Life We Live: “It’s hard to put a finger on who Denman sound exactly like. Guitar wise, the brothers are like a mix of Zakk Wylde and Paul Gilbert. Vocally, Ben‘s vocals are a little bit lower and more baritone than the average hair metal band. However, it still sounds like an authentic ’80s vocal. The album, produced by the legendary Michael Wagener, sounds as ’80s as the first Skid Row album, and even features a cameo from Mark Slaughter. The songwriting is exactly what’d you expect from a slightly heavier glam band of the era. There are some slight thrash influences, but for the most part, it’s wild hair metal guitars and big vocal hooks making for catchy songs about driving fast, partying, and women.”