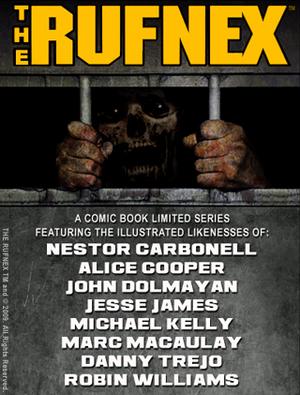 Alice’s likeness is to appear in a new comic book due early next year. Here’s the full press release:

Alice Cooper (Theatre of Death), Nestor Carbonell (Lost), John Dolmayan (System of a Down), Jesse James (Jesse James Is a Dead Man), Michael Kelly (The Changeling), Marc Macaulay (Burn Notice), Danny Trejo (Machete), and Robin Williams (World’s Greatest Dad) lend their likeness to upcoming action / horror comic book, THE RUFNEX. The announcement was made today by Miguel A. Insignares, the writer and artist of the project. Miguel A. Insignares’ previous credits include the official comic book adaptation for the 2004 film, Dawn of the Dead.

Mr. Insignares said, “I am honored to have such an incredible roster of talent which have agreed to lend their likeness to this project and I am thrilled at the potential of THE RUFNEX brand across various entertainment media.” Mr. Insignares and his staff will have a booth at the upcoming Spooky Empire’s Ultimate Horror Weekend on October 9-11 in Orlando, FL. He continued, “We foresee this comic book selling out fast and are therefore giving the horror fans a chance to pre-order the first issue for a special price at the event or at www.islandofthedead.com. In addition, we will be running several on-line auctions to give readers an opportunity to be illustrated in the comic book as a zombie.” (Proceeds to benefit the Hero Initiative Charity)

Synopsis: A group of merciless prisoners agree to a near suicide mission on a remote island in exchange for their freedom. Their mission soon takes a horrific turn as they discover the island is crawling with hordes of ravenous zombies. When the carnage begins, they must overcome their differences if they are to escape from the island of the dead.