Good news for AC/DC fans as the band will apparently continue past the end of its Rock Or Bust Tour. Brazilian journalist José Norberto Flesch has announced via his Twitter account that guitarist Angus Young will continue with his nephew Stevie Young on guitar, Guns N’ Roses‘ frontman Axl Rose as lead vocalist and a bunch of hired musicians to fill out the band. 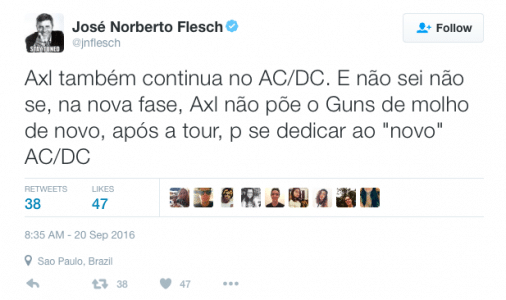 Rapid Fire 1983 posted the following message on its Facebook page (with slight edits):

Today is the last show of the Rock Or Bust Tour in the United States, but will not be the last of the band. According to journalist José Norberto Flesch, Angus Young will not retire and will continue with the band. The guitarist will hire new musicians and Axl Rose will continue as vocalist. 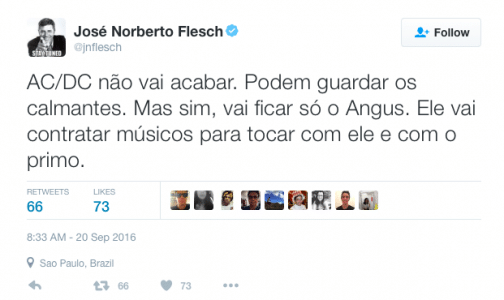 Moreover, after the tour of Guns N ‘Roses in Oceania / Japan, Axl Rose and Angus Young should plan a new material for AC/DC.”

AC/DC bassist Cliff Williams confirmed in a video message posted on AC/DC‘s Facebook page earlier today that he will no longer be continuing with the band. Williams stated [as transcribed by Sleaze Roxx]: “It’s time for me to step out. That’s all — not because we lost Mal [Malcolm Young], Phil [Rudd] or Brian [Johnson]. Everything changes when something happens like that. When Bon [Scott] died, it changed then. Everything changes so it’s not that, it’s just — I’m just ready to get off the road and do what I do in between tours…. I know how to do that. I know what I am going to do. Again, it’s just my time. I am happy. I just need — family time now, just chill out…”

Williams had previously already announced earlier this summer that he would not continue with AC/DC once the legendary group completed its Rock Or Bust Tour.