Guitarist Steve Lynch recently announced his departure from Autograph in order to focus on making music with his wife. Since then, fans have wondered if Autograph will either continue or disband. 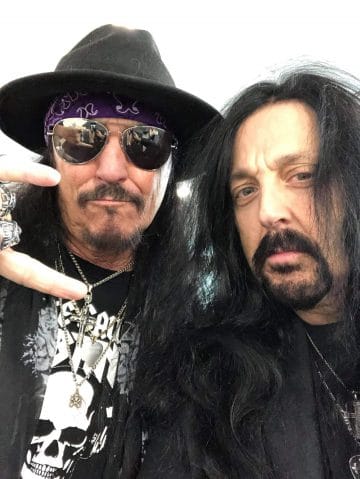 Autograph are no strangers to line-up changes as years ago, they reformed without singer Steve Plunkett. They introduced fans to their new frontman Simon Daniels and since then, they’ve been one of the rare cases where fans actually supported a new singer!

This time, they’re not missing a beat (or even a show) because they had something in mind… In advertisements for their upcoming show, they invited fans to see the show with a ‘surprise guest guitarist’. They haven’t said whether this guitarist will be in the band permanently or if they’ll have different guest guitarists in the future… but either way, it’s made things a little more fun and exciting.

Today, as an original member and one of Autograph’s songwriters, bassist Randy Rand flew out to LA to rehearse with the special guest guitarist, and he posted a picture of the two of them together.

It turns out, the band’s new guitarist is shredder, House of Lords guitarist, Jimi Bell!

Jimi joined the band House of Lords in 2005 and also has his own band, Maxx Explosion, an off-shoot of House of Lords. In 1986, he even worked in Michael J. Fox and Joan Jett’s film Light of Day where he performed both both as an actor and played on the soundtrack. He was also in the running to play with Ozzy. When Ozzy was looking to replace Jake E. Lee, Kramer (who endorsed Jimi) sent Bell’s video to Ozzy’s wife. Jimi’s playing was so good that Ozzy himself decided to play with him the next day. Jimi Bell was told that it was down to him and Zakk Wylde… but we know how that turned out.

I’m anxious to see the band with Jimi, who is a left handed guitarist. So much so that I’ll be making the trip down to see their first show together this coming Saturday in Woodstock, Virginia, USA where they’ll be playing with Kix.

From the album SAINT OF THE LOST SOULS.