Autograph featuring original members Steve Lynch (guitar) and Randy Rand (bass) have signed with the EMP Label Group and will be releasing a new studio album in the fall of 2017. 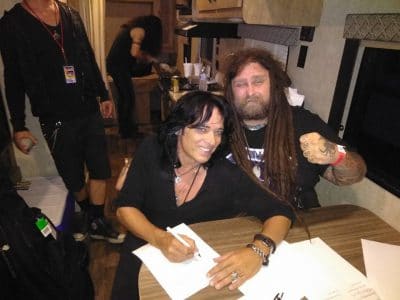 The following message was posted on the EMP Label Group‘s Facebook page just hours ago:

Back in April 2017, the Autograph band members were interviewed by Jay Oakley for Shockwave Magazine where they indicated that the new album was finished but they essentially wanted to hook up with a label. Lynch advised: “…But, we’ve finished a full LP now and that is going to be released soon. But, we’re waiting for the right deal and so we’re shopping right now.” Singer and guitarist Simon Daniels added: “The Louder EP, we did it all ourselves and we want to attempt to go to the next level. We’re not in a hurry or anything, we’re just trying to do something that projects the songs in a higher way and to more people. So, you need a little help from other things and getting people interested. So, we’re talking to people.”

You can read the rest of the interview with Autograph at Shockwave Magazine.