After years of unsuccessful attempts, guitarist Mark Knight appears to have achieved his goal as Bang Tango‘s original line-up of Knight, singer Joe Lesté, guitarist Kyle Stevens, bassist Kyle Kyle and drummer Tigg Ketler will be reuniting for select shows in 2020. Back in early October 2019, Knight had announced that all of the original Bang Tango members were performing in some way or another on Mark Knight & The Unsung Heroes‘ upcoming studio album. Since 2003, Lesté has forged ahead with Bang Tango but without any of the original line-up members aside from a one-off reunion show back in 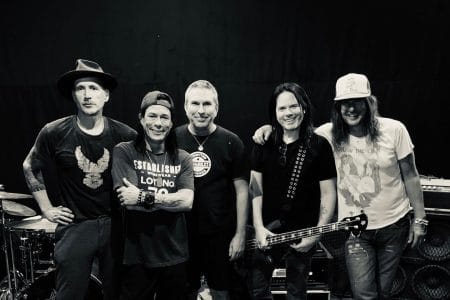 All five original members of BANG TANGO have officially reunited to play select dates in 2020.

BANG TANGO was founded by guitarist Mark Knight and bassist Kyle Kyle in 1988. After recruiting second guitarist Kyle Stevens, Joe Leste joined as the band’s frontman along with drummer Tigg Ketler to complete the classic line up of BANG TANGO.

“As with any band in any genre, over the years there have been multiple line-up changes and the obvious ups and downs, both personally and professionally with this band,” states frontman Joe Leste. “The five of us had, and still have a bond musically and personally that simply doesn’t come along every day. Within one hour of us getting in the rehearsal room, it was obvious that we needed to do this, and do it for the RIGHT reasons. We are all only here once.”#markknightmusic#kylekyle#joeleste#tiggketler #kylestevens@bangtango.original”