The following is an excerpt from the interview with Rob De Luca by Ryan Witting of Rockin’ You All Night podcast along with Witting‘s additional comments (with slight edits): 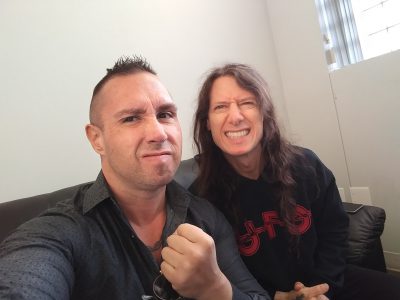 In August of 2018, UFO frontman, Phil Mogg, announced that his band’s 50th Anniversary tour would be his last tour. In a press statement, Mogg was quoted as saying, “For me, this is the end of my stint with UFO.”  Witting asked De Luca to share his thoughts on whether or not UFO might continue touring. De Luca told Witting, “I’m not sure. I just know that I wish it would continue. I hope that Mr. Mogg will get bored sitting in his house and say, ‘You know what? It’s been a little while. Let’s do some shows.’” De Luca added, “That’s up to Phil. He’s been the one member in the band for 50 years, and he has the right to make those decisions. Right now, I think that he just wants to take a break. Hopefully, it is just a hiatus, and not a permanent break, but I’m not sure.”

Witting asked De Luca what his initial thoughts were, when he had heard that Phil Mogg announced that UFO’s 50thAnniversary Tour would be his last. De Luca responded by saying, “It’s bittersweet. It’s really bittersweet, because it has been such a successful and cool tour, and great vibe. Regardless of it’s the last tour, it’s a really good tour. The bands that we are playing with (Blue Oyster Cult, Last In Line, Armored Saint, Jared James Nichols) are just phenomenal. So, it’s a really special tour, but it’s bittersweet, if it’s the last one.”

On September 29, 2017, UFO released their 22nd studio album — The Salentino Cuts. This album was released by Cleopatra Records consisted entirely of cover songs, and, at this time, is UFO’s final studio album. Witting told De Luca that he, like many fans, would like UFO to record another studio album. De Luca responded to Witting by stating, “That’d be great. Or a live record.  We’ve never done a live record with this incarnation [UFO’s current line-up featuring Phil Mogg, Andy Parker, Neil Carter, Vinnie Moore and Rob De Luca]. That would be fantastic.”

You can listen to the entire interview with Rob De Luca at Rockin’ You All Night‘s Soundcloud page, YouTube page or below: