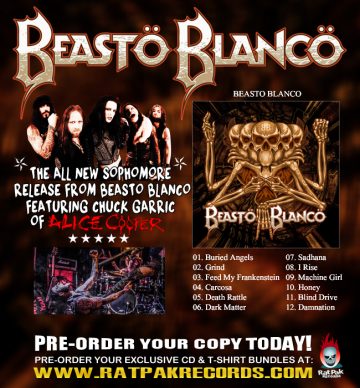 Back in November 2013, Sleaze Roxx had interviewed Garric asking him how came about to which the latter replied: “Yeah I think I felt it was time for me to release some music. I felt that it was time for me to finish that idea that I had in my head. I’ve been writing for so many years for other artists — it was just time for me to do this. I found the time during down time with Alice, or even when Alice is on the road I’m always writing and recording. It was time to do my record and out came Beasto Blanco.” 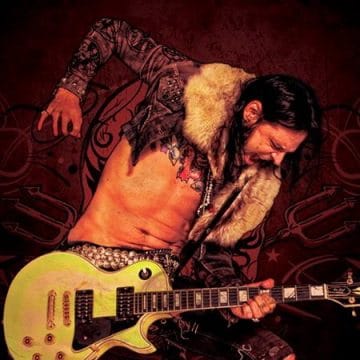 Influenced by bands such as White Zombie and Motorhead, Beasto Blanco’s all new 12 song sophomore release is a potent mix of heavy riffs, driving bass and melodic choruses. “I’m very proud of this release” says Chuck Garric, “This new album showcases the bands evolution as songwriters and our unity as a musical force” and Calico Cooper adds “This record is like a baseball bat to the chest that you want more and more of“.

Beasto Blanco’s version of “Feed My Frankenstein” can be heard on “Nights With Alice Cooper” radio show which is syndicated on over 100 stations worldwide and can also be heard at 15,000 AMC, Regal, Cinemark and NCM movie theaters in the United States throughout November.

Asked what makes this album so unique, Chuck comments “This album is a clash of elements coming together in an organic implosion of sonic perfection, Beasto Blanco is not about reinventing the wheel, we’re all about giving ’em cool rims!”

Beasto Blanco will embark on a 2016/17 Fall/Winter tour starting in November, that includes a string of U.S headline dates, as well as an arena tour of Europe with German Hard Rock heavyweights Boshe Onkelz. They return home to the U.S for another run of headline dates that will conclude 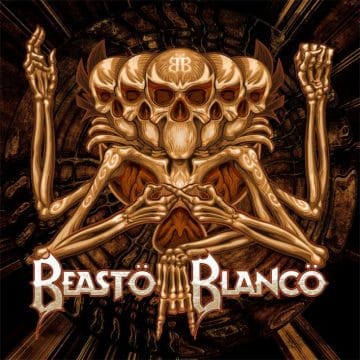 with performances on the 2017 Monsters of Rock Cruise in February….”

The new album can be pre-ordered at Rat Pak Records.

Beasto Blanco are joined by Alice Cooper on ‘Feed My Frankenstien’ at NAMM Jam 2016 put on by Delve Texas at The Grove of Anaheim in Anheim, CA, on January 22, 2016. For all your Rock News (and more), “like” Marshall of Rock https://www.facebook.com/marshallofrock – follow on twitter https://twitter.com/marshallofrock and check out http://www.marshallofrock.com/!