German veteran hard rockers Bonfire have released a video for their new single “Locomotive Breath” from their upcoming new studio album Byte The Bullet, which will be released on March 24, 2017. 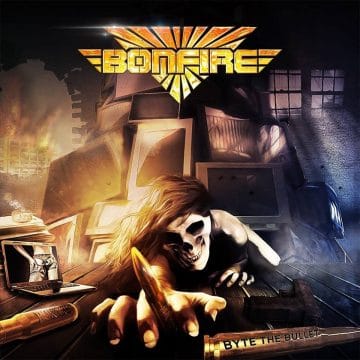 “In the last 30 years, Bonfire have always managed to reinvent themselves while remaining faithful to their original style.

In the summer of 2016, Alexx Stahl has taken the place as the new vocalist at the German rock legend. Proving himself as an exceptional singer and a excellent entertainer with more than 30 live shows. As a result, the decision was not difficult to integrate Alexx into the band as the permanent vocalist and to start the next studio album.

During the ongoing Anniversary-European Tour, which led the band through Scandinavia and Benelux, Bonfire composed and recorded the new album “Byte The Bullet“. The first time ever recording an album in their Hometown of Ingolstadt at Flatliners Studios.

With a new writing team of Ronnie Parkes (bass), Frank Pané (lead guitar), and Hans Ziller forming for the first time on this album. History was made.

Thus, “Byte The Bullet” (released on March 24th, 2017) is 12 brand new songs with a slightly heavier edge, as it was not known in Bonfire‘s soundscape. Let´s say it like that: “The metal is back!” Of course, the typical guitar-driven Bonfire sound is unmistakably preserved as well as big memorable choruses.

If that was not enough, Bonfire has managed to find a railway company as a partner, who painting one of their locomotives in the Bonfire style and logo.

Inspired, Bonfire matched the song “Locomotive Breath” for the first single and video,

Bonfire will of course present all of their hits, out of the more than 30-years career, and also a few brand new songs on their Byte The Bullet tour in 2017. 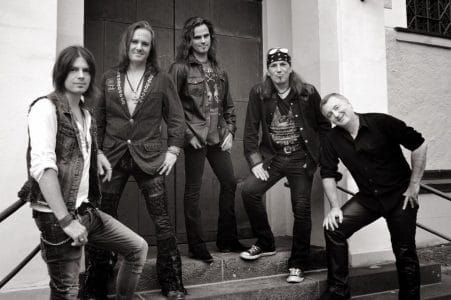