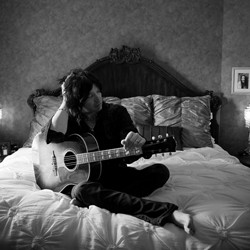 The long-awaited solo album from Cinderella frontman Tom Keifer may finally see the light of day in the Spring of 2013 after the singer/songwriter entered into a partnership with Merovee Records (a joint venture with David Letterman’s Worldwide Pants, Inc.). Two samples from the highly anticipated album, “Solid Ground” and “The Flower Song”, can be heard at www.tomkeifer.com/music.

The as-yet-untitled collection of 14 new songs ranges from intimate, organic, acoustic tracks to driving hard rock. It embraces the blues, rock and country roots that have always been present in Keifer’s unique sound that has generated the sale of over 15 million records worldwide.

The upcoming release is a raw, introspective look at the roller coaster ride that has been Keifer’s life for the past 15 years. From being told that he would never sing again as a result of a partially paralyzed left vocal cord, to the emotional and personal battles that followed, his solo debut is a story of perseverance, a testament to the power of passion and will, when combined with a true love of music.