What a difference a movie makes! About five years after ‘Anvil! The Story Of Anvil’ was released, who in the metal community and beyond does not know about the Canadian metal band Anvil? In a span of four days, Anvil was playing four shows in a radius of less than 200 kilometers, including two back to back shows in Toronto. Would this have been possible for the band with as much success prior to the release of ‘Anvil! The Story Of Anvil’? Probably not, so it was great to see that the resurging band was able to pull this off so well — if the band’s tour stop at the Rockpile West in Toronto was any indication.

I arrived at the venue at around 10:15 pm and therefore had missed at least two, if not three, of the opening bands. I started regretting this a little bit at the end when Anvil‘s lead singer and guitarist Lips commented at the end of their set how great all the opening bands had been, and in particular one opener that comprised of youngsters (around 16 years old). Upon checking more carefully the list of opening acts after the show, I think that Lips must have been specifically referring to Injustice when speaking about the youngsters. I did end up catching the set of the last opening act, Twitch — a band that I had never seen before but that a fellow local reviewer had previously raved about. If the other opening bands were nearly as good as Twitch on this night, I missed out on a couple of excellent groups. 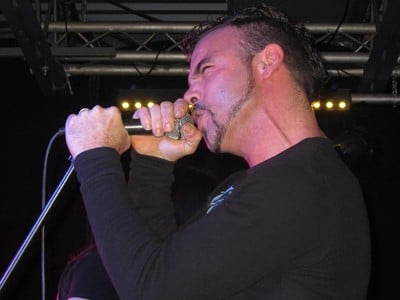 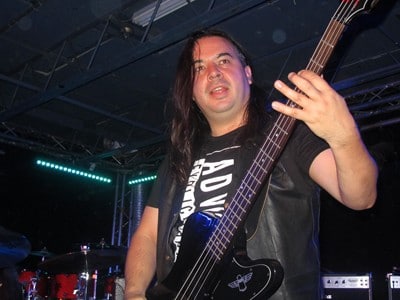 What can I say about Twitch? These guys can play! Every song played seemed better than the next on a first listen. Although Twitch‘s setlist posted on the stage floor suggested that ten songs would be played, the band ended up only playing eight. I was impressed with their performance and ended up hoping that I would be one of the lucky ones to catch one of their free CDs that lead singer Rick McHale was periodically tossing into the audience. All of the band members looked like they were enjoying the crowd and atmosphere. McHale even repeatedly took photos of the crowd throughout the set. Even though I knew none of the original songs that Twitch ended up playing, when McHale announced that the band had only one more song left — an original one — to be played, I was actually disappointed since the posted setlist suggested two more songs. Shortly after that there seemed to be some silent head nodding or communication between McHale and guitarist Chris Archer and the last song ended up being a scorching cover of Metallica‘s classic “Seek & Destroy”. There is no doubt that Twitch is influenced by the legendary thrashers but also by some more modern rock influences as well. Twitch describes their sound as Godsmack meets Metallica, and I have to agree with that description. Although I had made a mental note to myself to go buy the band’s CD — which I believe is called ‘Revolution’ — on my way out after Anvil‘s set was done… I sadly forgot to do so. Unfortunately, Twitch seems to have a rather low key web presence with no FaceBook site and no albums for sale on their website — hopefully this will change in the future. 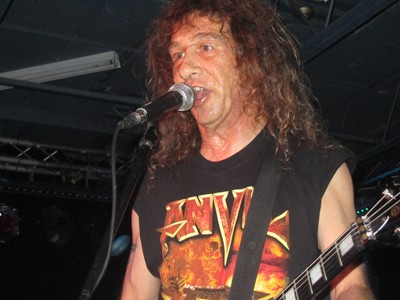 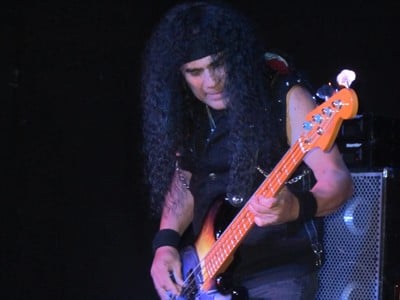 Anvil opened their set in a fairly low key manner as Lips and new bassist Sal Italiano were seen on stage doing some last minute checks with their instruments and amps. Lips disappeared from the stage into the audience where the standing portion of the venue was located before Anvil launched into the instrumental “March Of The Crabs”. Lips kept playing most of the song from that location before eventually speaking into his new black Flying V guitar and then heading back onto the stage. Clearly, there is a reason why no one else seems to uses a guitar as a microphone as Lips‘ voice sounded quite muffled but it did the trick and I give him high marks for originality on how to kick off a show. From then on, it was full speed ahead as the band cranked one great song after another.

With fifteen studio albums to choose from, the band certainly has lots of material that it can play. Anvil elected to kick off the show mostly with some old classics from the band’s probably three best known albums including “666” from ‘Metal On Metal’, “School Love” from ‘Hard ‘n’ Heavy’ and “Winged Assassins” from ‘Forged In Fire’. The newer songs played fit nicely into Anvil‘s set — “Badass Rock ‘N’ Roll” from the newest release ‘Hope In Hell’ and “On Fire” from ‘Juggernaut Of Justice’ sounded really good. In fact, if someone was looking for a greatest hits set from Anvil, they would have likely been disappointed because nine out of the seventeen songs played were taken from the band’s latest three album releases. I for one was happy to see Anvil play lots of their newer songs. However, the one newer track that I wish wasn’t played was “This Is Thirteen”, from the same titled album, simply because there are so many other better songs on that album including “American Refugee”, “Bombs Away” and “Flying Blind”. 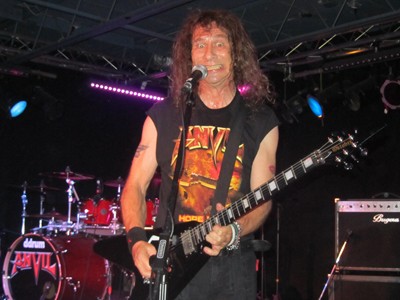 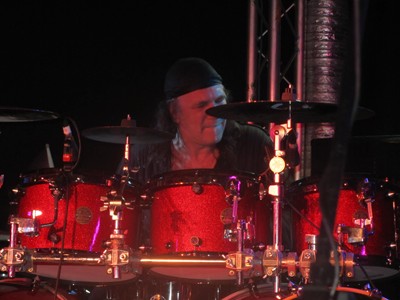 Lips was of course up to his old tricks bringing out a dildo to play his guitar with during “Mothra” and regaling the crowd with some of his funny facial expressions. The one thing I noticed was how much fun that the band, and in particular the frontman, seemed to be having. Unlike some headlining bands that I have seen play live in the last year, the members of Anvil clearly enjoy what they are doing and do not appear to be going through the motions when up on stage. Lips appeared and sounded genuinely grateful for the fans that had come out to the show. He even singled out a Japanese fan that had apparently flown in all the way from Japan to catch Anvil live given that they aren’t playing at the Loud Park concert in Japan this year. I noticed that there was a good mixture of old and young fans, which is likely a good sign for the band heading into the future. ‘Anvil! The Story Of Anvil’ has most likely been instrumental in giving Anvil a second lease on their career — which would have likely continued whether the film had been made or not. I am not one for solos of any kind but it was a real treat to see the icon Robb Reiner pound the living shit out of his drums during his solo in between the song “Swing Thing”.

Anvil closed off their show with their classic “Metal On Metal” which had fists pumping throughout the audience. There were two encores played, including the surprise song of the night, “Forged In Fire”, and the excellent show closer “Running”. I left the show feeling that I had seen a great passion filled show from Anvil and I look forward to seeing the band play live again in the future. 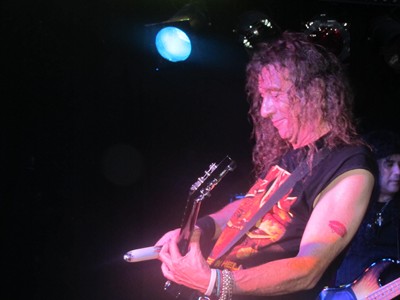 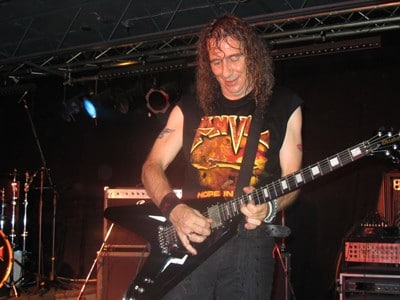