BLACK SABBATH FINISHING ON A HIGH

Review:
After having driven 45 minutes and parking my car, I was walking quickly by myself towards the FirstOntario Centre in Hamilton and marvelled how it felt like I was back in time 30 years before when heavy metal bands would regularly sell out arenas with 15,000 to 20,000 people in attendance. Tons of people were still making their way to the arena despite opening act Rival Sons having likely already taken the stage more than 45 minutes ago. The line-ups to purchase beer were what seemed to be miles long — alright I am exaggerating but you get the picture. Washrooms were crowded and took at least five 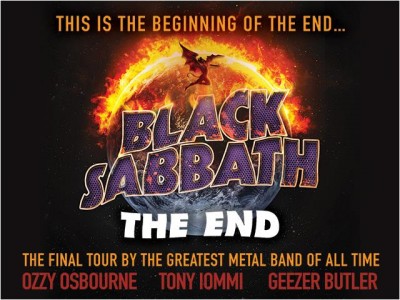 minutes to get into. The one merchandise booth that I was able to find would have likely taken me half an hour to get through. In some ways, since the majority of people seemed to be men in their ’50s (the on notable difference from 30 years ago), it almost felt like I was at a Toronto Maple Leafs (sorry Hamilton) game, which always seem to be sold out except the corporate suits and hockey jerseys were traded in for leather jackets, rock t-shirts and jeans.

Whatever the case, there was an undeniable excitement in the air to see heavy metal pioneers Black Sabbath on their last ever tour. While many bands have announced “farewell” tours in the past such as KISS and the Scorpions only to  thankfully later renege in that regard, I have always believed that Black Sabbath‘s last tour would indeed be their last since Ozzy Osbourne, Tony Iommi and Geezer Butler are all nearing 70 years of age. With health issues having reared their ugly heads and in particular for Iommi, it seemed that if one band was nearing the end, it was indeed Black Sabbath. It was therefore no surprise to me that it seemed like virtually every seat surrounding the arena stage — and even some with a less than parallel view of it — seemed filled meaning the venue was sold out! Having elected to get the cheapest ticket possible — which still cost over $80.00 Cdn — I was in the upper level of seats although I had definitely scored one of the better seats for that level. It was neat and exciting to see the entire venue filled with people all the way to the rafters. 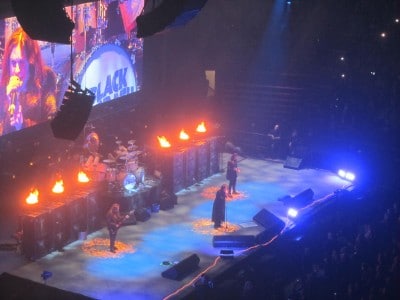 Before long, Black Sabbath hit the stage with the song bearing their name. To be honest, while the song is a good one and certainly a cool track on the group’s debut album, it was a bit of a slow start for Sabbath on this night with that rather slow building track. The one thing that struck me though was how good Black Sabbath sounded. It seemed that the music played by Iommi, Butler and drummer Tommy Clufetos was tight, clear sounding and right on the money. Osbourne sounded pretty good although by the fourth song, it seemed that he was always singing in a vocal range different than how the songs can be heard on Black Sabbath‘s various albums. That being said, Osbourne‘s slightly off tone singing was not a major impediment to my overall enjoyment of the songs. In addition, I don’t expect at this point for a 67 year old singer to sound exactly like he did back when he was in his 20s and high as a kite! I was also impressed with Osbourne‘s overall energy levels as he moved around quite well on stage for a 67 year old and certainly a lot more than Butler and Iommi who maintained their mostly sedentary ways throughout the entire evening. 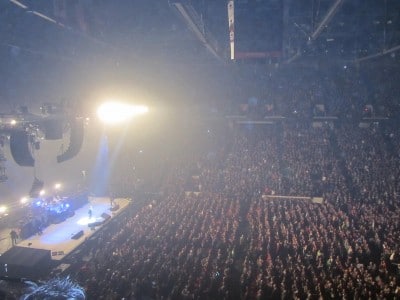 After the opening track, things picked up quickly with “Fairies Wear Boots” and “After Forever.” The audience really seemed to get into “War Pigs” which was wisely placed mid-way through Sabbath‘s set and which intro always sparks a great sing along from audiences. You know the crowd is into it when a good portion of the people in the upper bowls are standing rather than staying in their seats. One of my favourite tracks during the evening was the little played “Hand Of Doom” which hadn’t been played by Sabbath (until this tour) since 1978. I was disappointed to see Clufetos get a drum solo, especially taking into account that only 13 actual songs in total — if you don’t count he instrumental “Rat Salad” — had been played during the evening. I get that the drum solo probably gave Iommi, Osbourne and Butler a little respite until the end but it was the low point of the night and had a lot of people in the upper bowl seated rather than standing. 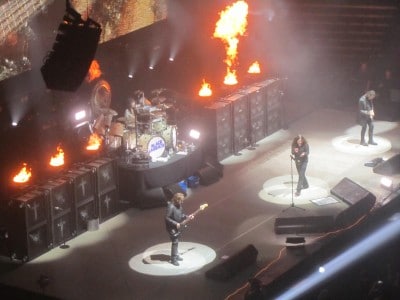 Although Black Sabbath ended up playing for about one hour and 45 minutes, I was disappointed with the short setlist compared to when they played 16 songs (if you include “Rat Salad”) during their tour stop in Toronto back in 2013. The actual setlist was also a bit disappointing. I would have loved to hear classics such as “The Wizard” (likely my favorite Black Sabbath song), “Sabbath Bloody Sabbath” and of course at least one track from their album 13 which did reach #1 in nine different countries. Hearing “God Is Dead?” or “End Of The Beginning” from the 13 album would have been nice.

One cool point in the evening turned out when Osbourne was introducing his bandmates. Iommi looked genuinely touched with the somewhat extended ovation and applause that he received 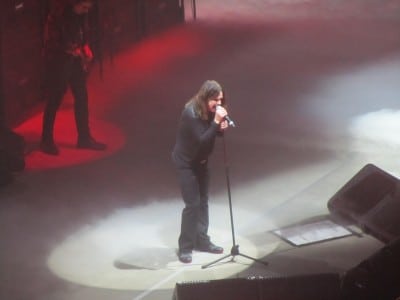 from the crowd. Sabbath predictably ended the evening with “Children Of The Grave” before leaving the stage and Osbourne asking the crowd to go “extra crazy” for one more song which of course was a rendition of the classic “Paranoid.”

Overall, I left satisfied with Black Sabbath‘s performance and was glad that the heavy metal pioneers were seemingly leaving while still at the top of their game. As I was leaving back towards my car, I couldn’t help but think of the stark contrast between what older more established heavy metal acts that have sold millions of records decades ago are experiencing compared to newer highly promising but sadly for the most part unknown metal bands. You have Black Sabbath selling out an arguably huge venue with a minimum ticket price of $80.00, t-shirts at $50, a new CD costing a whopping $30, and middle aged men and women rocking and singing along to their songs. On the other hand, you have newer hard rock and metal bands struggling to get 50 to 100 people to their shows (with prices often $10 or less) even in their hometown. I get that Black Sabbath have earned their success, have come up with some amazing songs and been around for almost five decades but it seems that the disparity between rich and poor in the music business keeps getting wider with the rich getting richer while the poor keep getting poorer. 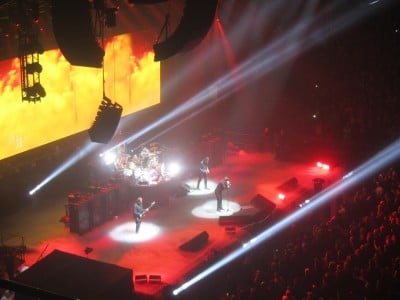