SCORPIONS REDEFINE WHAT ROCKING AT AGE 65+ SHOULD BE

It is really hard to believe that both of the Scorpions‘ remaining members from their 1969 line-up — lead vocalist Klaus Meine and guitarist Rudolf Schenker — are both 67 years old because their stage presence and performance at the Molson Amphitheatre in Toronto was more akin to a live performance from two 40 year olds. I think of how slow moving and out of shape my father was — no disrespect is meant to my father — when he suddenly and sadly passed away at age 56 and just have to shake my head on how Meine and Schenker are defying father time with their stage energy and presence. It’s not that they were jumping around all over the place during the time that they were playing but they were moving around quite a bit and frankly outperforming many who would be 25 years younger than them on this night. To say that I was impressed was an understatement.

Funny enough, I had considered skipping the Scorpions‘ latest tour stop in Toronto given that I had left disappointed with the band’s performance three years ago at the same venue when the German rockers were doing their farewell tour. However, given that the opening band this time around was none other than Queensryche with the phenomenal Todd LaTorre on lead vocals, the decision to attend on this night was an easy one and I elected not only to go see the Scorpions but also to pay the big bucks to be in the general admission area. It is hard to believe that I had never been in the Molson Amphitheatre’s general admission area before but in the past, either I had found the ticket prices quite exorbitant to get into that area or I simply had no luck when trying to purchase tickets. It was mostly the former on why I never made it to that venue’s general admission area because ticket prices are usually quite high for that venue since it really only hosts artists that have had considerable commercial success or festival type concerts.

Fellow Sleaze Roxx writer Eduardo and I met up at the Molson Amphitheatre’s entrance 20 minutes before the scheduled start time for the event and I was pleased to see our friend The Meister already settled at a key spot on the barrier to the left of the stage between the main stage and the ramp leading to the audience. Although I was not able to get to the barrier without being 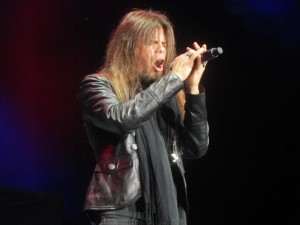 an asshole about it, I was able to get behind The Meister for what turned out to be the best vantage point that I had ever had for a show at the Molson Amphitheatre. Queensryche eventually made their way to the stage with little fanfare and really let the music and particularly LaTorre‘s amazing vocal pipes do the talking. This was my third time getting to see Queensryche with LaTorre at the helm in less than a year and a half and I just knew from past experience that the band would deliver an awesome performance. As expected, Queensryche sounded really good and it was great to get a close up view of the band while it performed. LaTorre‘s singing was as usual out of this world as he made singing the the tough backlog of Queensryche material seem — with the emphasis on “seem” — so easy. 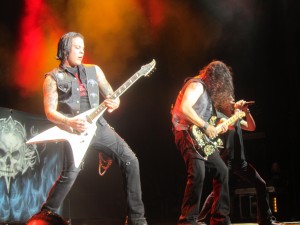 The Seattle originating band’s setlist was fantastic and actually included many of my favorite Queensryche songs — how did they know? — such as “The Needle Lies” and “Empire.” Although Queensryche were really limited to only eight songs — since I do not count the intro track “Anarchy-X” as an actual song — they did a great job of covering the band’s golden era with one song from 1986’s Rage For Order (“Walk In The Shadows”), two songs from 1988’s Operation: Mindcrime (“The Needle Lies” and “Eyes Of A Stranger”) and three songs from 1990’s Empire (the title track, “Silent Lucidity” and “Jet City Woman”). In other words, the band played some of their biggest hits to the delight of an already large audience despite the early start time. I was pleased that Queensrcyhe did include at least one new track from their forthcoming new album Condition Hüman, which certainly sounded very promising from the one track “Guardian” that I had already heard. Queensryche ended up playing their new song “Arrow Of Time” which from what I remember was built on a great guitar riff, was nice and heavy, and just built up my expectations even more for their upcoming new album. No need to say that I thought that “Arrow Of Time” sounded really good on a first listen. 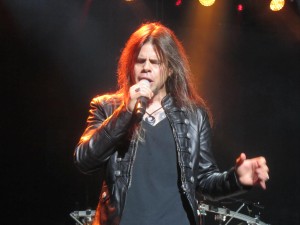 I was really impressed with the entire band on this night. There is no question that LaTorre stole the show with his impeccable singing and screams. However, guitarists Michael Wilton and Parker Lundgren traded soaring guitar licks and solos, and have to be considered one of the best tandems currently out there in the heavy metal world. I was particularly impressed with drummer Scott Rockenfield. You sometimes don’t appreciate as a fan how good someone is — and particularly drummers — when you are far away from the stage but my closer vantage point this time around made me really appreciate how talented that Rockenfield truly is to play the often complex Queensryche material. The group closed off an impressive performance with the classic “Queen Of The Reich.” As Queensryche ended their set, I was thinking that Toronto has been long overdue in getting a headline tour date from the band and I hope that this is rectified in the near future! 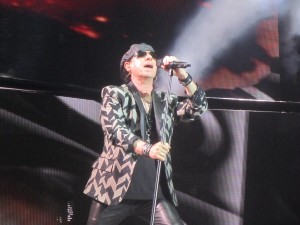 Next up were the legendary Scorpions. As previously indicated, I would have probably skipped their Toronto stop this time around had it not been for Queensryche opening. I am glad that I made it out because the Scorpions simply put on an amazing performance. The stage set up was spectacular with the entire stage back drop being like one huge big screen and tons of lights but in a tasteful manner and not in overkill disorganized mode like some other bands that will remain nameless. Scorpions hit the stage with their new track “Going Out With A Bang” which was fitting for a band celebrating — it’s hard to believe — its 50th anniversary! It wasn’t until the German rockers launched into their classic “The Zoo” that it seemed that the crowd really got going. 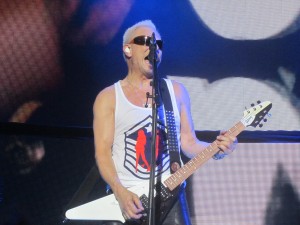 Although I enjoyed the varied setlist and having the Scorpions play snippets from some of their ’70s classics such as “Speedy’s Coming” and “Top Of the Bill” — which I admittedly don’t really listen to — I do question why the band continues on playing its instrumental “Coast To Coast.” I have always enjoyed the song but a song with vocals would be more appreciated by yours truly. It did not seem that the song was being played to give Meine a break from singing since it was the fourth song played. I also wasn’t crazy about the inclusion of “Delicate Dance” which is essentially an extended guitar solo from Matthias Jabs. The song felt quite odd given that while Jabs clearly had centre stage while positioned on the stage ramp leading into the audience, another guitarist showed up on the main stage to presumably provide some rhythm guitar accompaniment with Schenker nowhere in site. If I recall correctly, Meine identified who the guy was at the end of that song but it just seemed so odd to have him out there instead of Schenker. 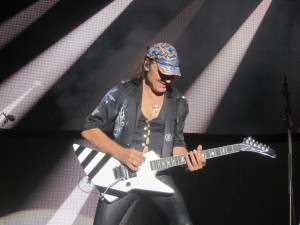 Aside from those two instrumentals, I was really happy with the Scorpions‘ setlist. Although I am not that fond of ballads, there is no denying that the Scorpions have penned some of the greatest ballads out there and it was really cool seeing what seemed like the entire audience singing along with Meine during their two blockbuster ballads “Send Me An Angel” and “Wind of Change” from the band’s studio album Crazy World. Given that at least Meine was up on the stage ramp during those songs, I had to turn around to see him and could see the audience singing along during those songs which was really cool! I thought that the new songs played from the Scorpions‘ new album Return To Forever including “We Built This House” and “Rock ‘N’ Roll Band” fit in quite well with the band’s classic and most well known tunes. One particular treat was hearing “Dynamite” which along with “Big City Nights” were my favorite tracks from the Scorpions for the night. 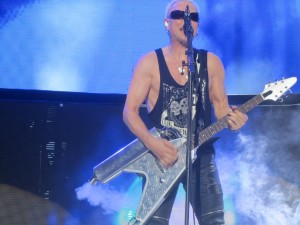 I would be remiss if I did not mention how much energy that the 67 year old Schenker displayed on stage. Whether it was moving left to right and right to left in his trademark fashion while playing, doing some jumps or simply “running” towards the stage ramp, the man expanded tons of energy and it really felt like he gave it all to the audience. I was impressed with how good Meine sounded even though there seemed to be some back up tracking at some point, and particularly during the opening whistle part of “Wind Of Change.” In any case, Meine sounded good and exceeded my expectations considering that he is 67 years old and seeing how many other singers five to 10 years younger than him are really losing their voices. Meine also threw more drumsticks into the audience than I had ever seen any performer do before. It seemed that every second song, Meine would throw out about twenty drumsticks during the audience during the guitar solo of those songs. It was cool to hear Meine talk — when introducing the older ’70s songs — about when the band was first starting out with dreams of playing other countries including Canada while they travelled in a van across Germany to play various gigs. If anything, it was a reminder to all those aspiring bands out there that dreams do come true and just about every band has to pay its dues. 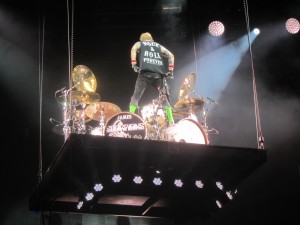 Another highlight was James Kottak‘s drum solo. I have never been a fan of any kind of solo during a concert but Kottak was very entertaining and his drum solo with his drum kit getting raised high up in the air — which reminded me a lot of vintage KISS when Peter Criss was in the band — was spectacular. You may remember that Kottak made headlines all over the world for all the wrong reasons about a year and a half ago when he was arrested and sentenced to a month in jail for insulting Islam and lifting his middle finger at Muslims at an airport. I wasn’t sure whether the rest of the Scorpions would stick with him after that embarrassing ordeal but I got to give credit to the Scorpions and Kottak for bouncing back from that stronger than ever! 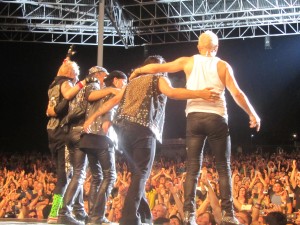 The Scorpions closed off their set with five tracks which simply brought the crowd into a frenzy. The classics “Blackout” — with Schenker playing a guitar with a big smoke machine — and “No One Like You” from the studio album Blackout really had the crowd going. “Big City Nights” followed and seemingly had most of the crowd including myself singing along at the top of their lungs. The Scorpions came back for two encores: the ballad “Still Loving You” which I have never been that fond of and the obligatory show closer “Rock You Like A Hurricane.” I never thought this would be possible going to the show but I left thinking that I had seen one of the best shows of the year with the Scorpions having given me way more than my money’s worth this time around! I hope that the German rockers will come back to Toronto in the future and I will definitely make a point of catching them live if there is such a next time.