ANOTHER FANTASTIC SOLD OUT SHOW FOR STEEL PANTHER 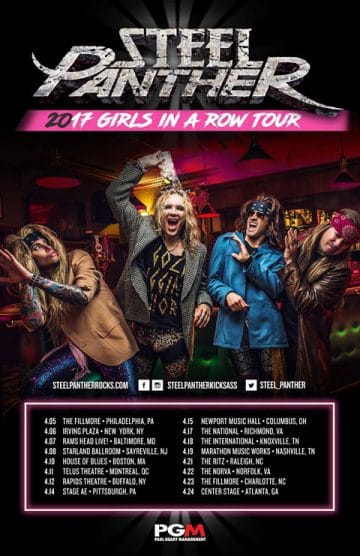 If there is one band that I am really grateful for, it definitely has to be Steel Panther. The comedy glam rockers tour, tour and tour continuously and I likely get the chance to see them at least two times per year within an 1.5 hour radius from where I live. This time around, although Steel Panther were not offering any Canadian dates, they were playing in the USA’s version of Niagara Falls which is right on the other side of the Canadian border. Accordingly, it was an easy decision to trek down to the Falls and catch Steel Panther play live once again. This would be my first time seeing a concert in Niagara Falls on the US side so I was looking forward to checking out The Rapids Theater venue.

I was particularly excited to see Steel Panther play because I could use a little cheering up and I had taken a sneak peek at their setlist, and they were playing four tracks from their latest studio album Lower The Bar, which I really really like. For the drive from Toronto to the venue, I had brought Lower The Bar (of course) but also All You Can Eat. After listening to both albums, my first thought was that while All You Can Eat definitely has some top notch songs such as “Gloryhole” and “Ten Strikes You’re Out,” Lower The Bar was stronger overall. It sounded like the songs on All You Can Eat dropped a notch or two towards the end of the album while on the aptly named Lower The Bar, the quality consistency of the songs remained throughout. Having not crossed the border since Donald Trump took over the American presidency from Barrack Obama, I budgeted a little extra time to get through the American border just in case. As it turns out, there were no issues and in fact, this was likely one of the fastest border crossings that I got to do in a while.

The Rapids Theater is located very close to the Rainbow Bridge border crossing so it took no time to get there once on US soil. I was a little concerned by how sleepy the city felt. There were hardly anyone on the streets even though I had arrived sometime between 8:30 and 9:00 pm. Luckily, The Rapids Theater has a rather massive police station as one of its nearby neighbours so I did feel rather safe walking down the eerily sleepy streets. There were only a handful of people in front of The Rapid Theater and it was very easy to find parking on the street so as I walked towards the venue, I started wondering whether I had the right location. Usually for Steel Panther concerts, I like to get there as soon as the doors open because the venues that they play tend to be pretty full already by the time the opening band kicks things off. This time around, The Rapids Theater granted me a photo pass so I knew that I would get access to the photo pit no matter what time I arrived. Although I had previously obtained a photo pass for the M3 RockFestival back in 2015, I wasn’t able to use it back then given that my camera was not up to par at the time to access the photo pit. This time, I specifically requested a photo pass knowing that while my new camera was most likely not in the league of the cameras from other photographers in attendance on this night, it was at least good enough to access the photo pit if there were any camera requirements.

I walked in just as the opening band (the name sadly escapes me) was playing its final number with the singer having ventured into the audience to stand on what appeared to either be a part of the bar or some higher up section towards the middle-back of the venue. I should have known better since I’ve been to many Steel Panther concerts already but wow! The place was packed with people! My first thought was “How the hell am I going to get to the photo pit with all these people?” Luckily, there seemed to be a little open alley to access the front and soon enough I was in a rather roomy cordoned area for photographers waiting for Steel Panther to hit the stage. As I waited for Steel Panther to take the stage, I got some last minute helpful tips (thank you!) from one very nice female photographer whose name and who she was shooting for unfortunately escapes me. The Rapids Theater was definitely very impressive. It had very high ceilings with what felt like a big square shaped area meaning a large general admission, at least one of the side sections propped up with even a wheelchair type section and a high up balcony that was still pretty close to the stage. It seemed that there wouldn’t be any bad spots in the entire venue to watch the concert from. If only Toronto had more of these kind of venues!!! 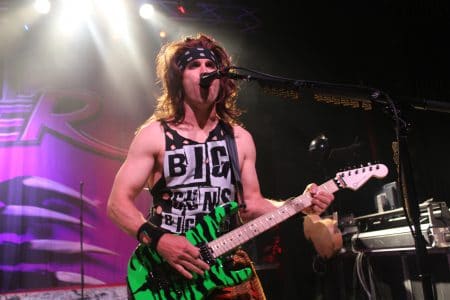 With the houselights suddenly going down, the crowd got pumped up in a hurry by hearing KISS‘ anthem “I Love It Loud” over the PA system. This set the stage for Steel Panther kicking off their set with the strong one-two-three punch of “Eyes Of A Panther,” the new track “Goin’ In The Backdoor” and “Just Like Tiger Woods.” It was kind of neat being in the photo pit ahead of the more sardine like packed audience in the general admission who were of course more visibly into the concert than the photographers who were simply positioning and clicking away. I couldn’t help but turn around once in a while to appreciate the enthusiastic crowd’s response to Steel Panther‘s showmanship and killer songs. Not needing a million photos for this concert review, I had what I thought I needed within the two first songs so was the first photographer to seemingly step out of the photo pit. Before long, it was time for the Satchel and Michael Starr stand up comedy routine which included some older joke favorites as well as seemingly some new comic material. Satchel introduced 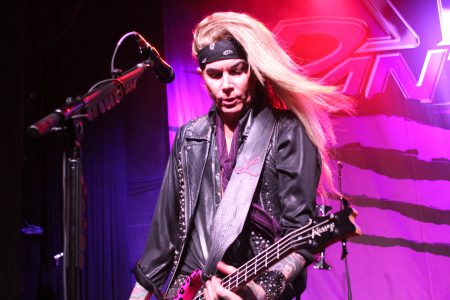 Starr as one of the top 25 heavy metal singers which he later shrunk down I believe to the top 25 heavy metal singers in the venue on this night. The same type of intros were bestowed upon drummer Stixx Zadinia and bassist Lexxi Foxx. There was a lot of talk about underage girls given that this was apparently an all ages show and of course, some silly plugs for being high on cocaine. Whatever the subject, all I know is that I could find myself laughing out loud and there were tons of smiling faces everywhere I looked in the audience.

As Steel Panther launched into their classic song “Asian Hooker” with the obligatory asian woman taken from the audience to be serenaded onstage, I could only shake my head at what a terrible pre-chorus portion that song has (“Sucky fucky, sucky fucky, sucky fucky / Smells like sushi”) but you know, it works and people were really into the song. Next up was “That’s When You Came In” from the new studio album Lower The Bar, which sounded absolutely phenomenal live. If I remember correctly, Starr even got the cr 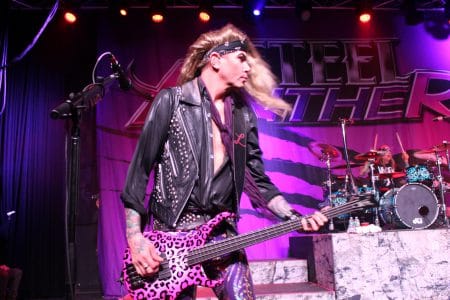 owd to sing along towards the end of the song. It seemed like the Steel Panther members picked up their energy levels a notch when they were playing the new songs as it was obvious that certain audience members were not familiar with the new tracks from Lower The Bar. Frankly, I would have liked to hear even a few more songs from that album but I get that it becomes difficult to drop fan favorites like “Asian Hooker” and “Fat Girls (Thar She Blows).” I can also recognize that the older songs got a stronger reaction than the new stuff.

One part that I could have easily done without was Satchel‘s guitar solo. It’s not that it wasn’t entertaining because he did a good job as far as guitar solos are concerned but I would have much rather have heard one or two extra songs. Maybe Starr and the rest of the guys needed to take a little break but I doubt that given that we were only seven songs into the show before Satchel‘s extended guitar solo reared its ugly head (so to speak). Another new song was then played with “Anything Goes” before Steel Panther finished off the rest of the evening on a fever pitch. If I remember correctly, this is the point where Satchel and/or Starr found yet another asian woman to bring up onstage 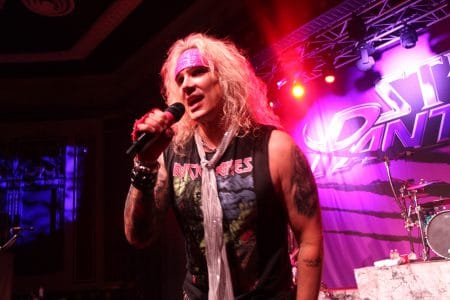 to get serenaded but this time by all band members who took their turn singing a few lines. Now, I’ve seen Steel Panther do this routine countless times before but it still brought a smile to my face to see each band member come up with silly rhymes and likely spontaneously for apparently at least Starr and Satchel.

From there, the apparently 16 year old asian woman — correction, girl — got serenaded with Steel Panther‘s classic “Girl From Oklahoma” which had the audience singing along but more surprisingly, had the asian girl sining quite a few lines. In fact, she sang so well that Satchel offered her the lead singer position or something like that to Starr‘s dismay. From then on, a series of beauties and some not as great showed up onstage for Steel Panther‘s other classic “17 Girls In A Row.” I was surprised to see how many women onstage were bearing their breasts for the whole audience to see. Clearly, women seem to be a bit more liberated or open minded on the US side. “17 Girls In A Row” was followed by “Gloryhole” which was the lone representation from the band’s third studio album All You Can Eat. From there, it was the customary Steel Panther‘s threesome to close their show — “Death To All But Metal” which is one great heavy metal anthem, and the encores “Community Property” which sparked huge sing alongs from the crowd and “Party All Day (Fuck All Night)” which might be the ultimate party anthem.

Once again, Steel Panther put on a great show and proved why they continue to buck the trend by selling out venues (such as The Rapid Theater on this night) while playing ’80s styled glam rock heavy metal! 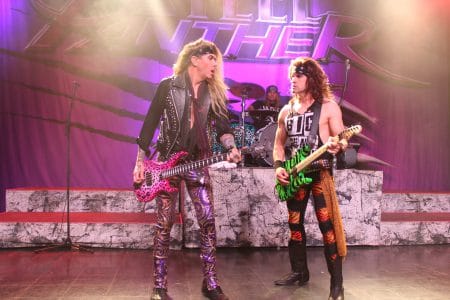 Anything Goes – Steel Panther at the Rapids Theater 4-12-17