STEPHEN PEARCY HAS STILL GOT IT! 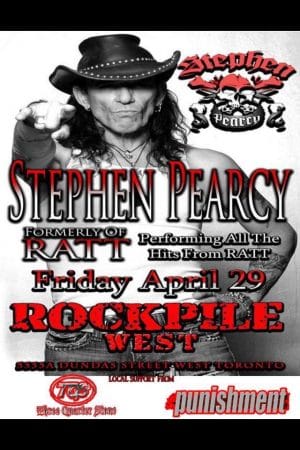 Some reviews are just super easy to write. This will be one of them. Ratt‘s former frontman Stephen Pearcy and his band simply killed it at The Rockpile in Toronto. A rabid crowd, great setlist and killer atmosphere (at least from the general audience standing area) makes for one hell of a concert!

To think that I almost missed it! I was planning on arriving at around 9:30 pm to hopefully secure a place in the first row next to the stage but alas I fell asleep, despite trying not to, when I was putting my three year old daughter to bed. She was having a hard time falling asleep and asked if I would just lay down next to her to help her fall asleep. Before you knew it, I was lights out before waking up in a bit of a panic wondering what time it was! Luckily, it was only around 10:15 pm meaning that I would still be able to make it to The Rockpile on time to catch Pearcy since I didn’t expect him to hit the stage until at least 11:00 pm. By the time that I arrived at The Rockpile, the parking lot was quite packed (the show must have sold out or been close to it) and the last opening band Three Quarter Stone was playing their second last song of their set. That was a little disappointing as I was hoping to catch Three Quarter Stone‘s entire set but at this point, I was just glad to be able to get there in time to see Pearcy and I even got within one row of the front of the stage.

The set up time between Three Quarter Stone‘s set and Pearcy‘s stage arrival seemed pretty short. Before I knew it, Stephen “Fucking” Pearcy was on the stage! For those who don’t know, I have only had five bands that I have considered to be my “favorite” band and back in the day (i.e. going back to 1984), Ratt held my top band slot for a little while. No need to say that I love Out Of The Cellar and not surprisingly, it was one of my picks for my top 12 albums that have stayed with me over the years. In fact, Out Of The Cellar ranked an impressive number three with the Top 12 albums that have stayed with Sleaze Roxx readers over the years. Ratt‘s next album Invasion Of Your Privacy is even better to my ears but Out Of The Cellar had more of an impact one me given that Ratt became my favorite band based on that album back in the day.

I got to confess that while there is no question that I was looking forward to seeing Pearcy play live, I was somewhat reticent 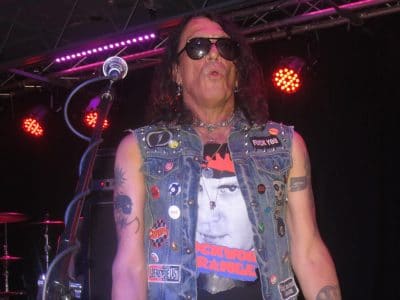 given that there were reports that he wasn’t singing that great anymore. Accordingly, when Pearcy‘s band opened with the great opening notes of “Wanted Man”, I was quite curious to hear how Pearcy sounded like since that would likely play a key factor on how much I would enjoy the show. I was quite pleased when I first heard Pearcy sing as right away, I could tell that while he was probably not going to sound as good as he did on the Ratt albums, his singing was still quite good and would not be an issue on this night. Pearcy and his band played three songs — “Wanted Man”, “Drive Me Crazy” from the underrated Dancing Undercover album and “Dangerous But Worth The Risk” from Invasion Of Your Privacy — before Pearcy addressed the crowd. 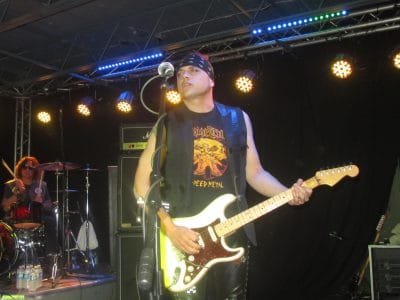 The one really great thing about Pearcy‘s vocals on the Ratt songs is that you can always hear exactly what Pearcy is singing as he does not speed through the songs like someone such as Sebastian Bach might do. All of the Ratt songs are methodical and usually Pearcy is always singing at a set gear. This translates into amazing singing opportunities for the audience who can easily sing along word for word with Pearcy. And that is exactly what happened on this night and right off the bat, Pearcy exclaimed that everyone was singing really well. It must be such a cool feeling to be singing a song and hearing what seems like the entire crowd singing along to every word with you. 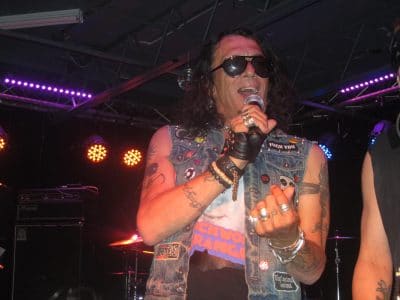 More” and “Round And Round”, Pearcy‘s setlist was quite different from the one performed by Juan Croucier and his band when they had performed at The Rockpile back in late September 2015. Unlike many of their peers, I have always felt that Ratt have never released one bad album and in fact, seeing Pearcy perform reminded me on how much I like Ratt. These days, the only Ratt albums that I listen to are the “big two” — Out Of The Cellar and Invasion Of Your Privacy — but that’s mostly because I purchased the reissued versions through Rock Candy Records. I’ll definitely be picking up the reissued Dancing Undercover and  Reach For The Sky because hearing Pearcy play songs from many of the Ratt albums other than the “big two” cemented to me how much I like anything that Ratt have come up with. Accordingly, it really did not matter what songs that Pearcy and his band would play on this night as I would enjoy whatever Ratt songs they had to offer. “You Think You’re Tough” and “Way Cool Jr.” were the next tracks and fun to hear again. One surprise of the night was hearing “Givin’ Yourself Away” from the Detonator album, which sounded really good. I’ll have to revisit that album as well. 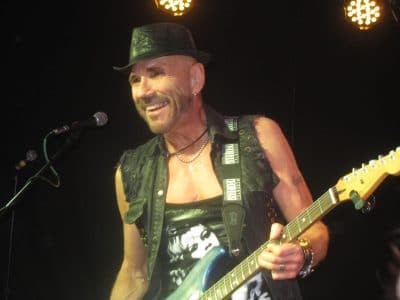 From then on, it just seemed that the concert just kept getting better and better. Pearcy repeatedly told the audience how great we were singing and he made a few comments such as he considered himself more of a yeller than a singer. He apologized for not moving around so much or as he put it “rolling around like a ball” on stage given that he had hurt one of his ankles or perhaps it was one of his knees. You got to hand it to Pearcy. The guy looks in great shape for someone who will be turning 57 this year and especially when comparing his physique to some of his peers out there. The great songs kept coming with “Slip Of The Lip” (one of my faves) and “I’m Insane.” Pearcy must have noticed me singing along quite loudly because during “I’m Insane”, he turned the mic over to me to sing the words “I’m Insane!” Yeah baby! That was awesome! 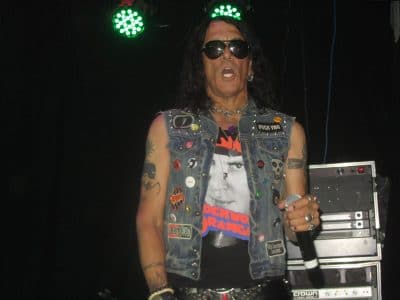 Pearcy then told the crowd that they would be playing the “ugly three” or something like that. Well, the “ugly three” got the crowd in an absolute frenzy. The triple shot of “You’re In Love”, “Lay It Down” and “Lack Of Communication” really got the crowd going with what seemed like the whole audience singing along and part of the crowd initially jumping up and down a bit. After the “ugly three” were played, Pearcy revealed that the songs were collectively called that way because they were all in the same key. Next up was the highlight of the night for me. Hearing Pearcy play “U Got It” from the Ratt EP that came out about 33 years ago was a real special treat. It had to be two decades since I heard the song yet it still sounded very familiar to me. The song must have been embedded into my mind from back in the ’80s. It was cool to see many actual performers such as Red Dragon Cartel‘s frontman Darren James Smith (whose band sold out The Rockpile when they played two years ago with Smith at the helm) and Diemonds‘ singer Priya Panda in the audience showing what an impact that Pearcy has had on the hair metal scene. 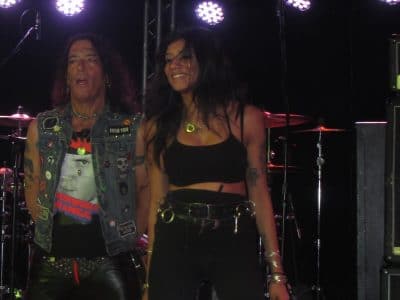 Another surprise was seeing Panda join Pearcy on stage for the ending portion of “Back For More.” I am not sure whether that was planned or not but during the song, Pearcy reached out to Panda who was in the general standing audience area and all of a sudden, there was Panda making her way through the crowd to the side of the stage before getting up on stage to sing the chorus portion of “Back For More” a number of times alongside Pearcy. Panda‘s huge smile spoke volumes of what this meant to her and she even exclaimed to the crowd how cool it was to be on stage with Pearcy! As Panda was making her way off the stage, Pearcy commented on what a good singer that she was. The surprises did not end there as Pearcy and his band then played a blistering version of Judas Priest‘s “Heading Out To The Highway” which once again had the crowd singing along to virtually every word. The evening ended with the only possible song closer — Ratt‘s hit “Round And Round.” 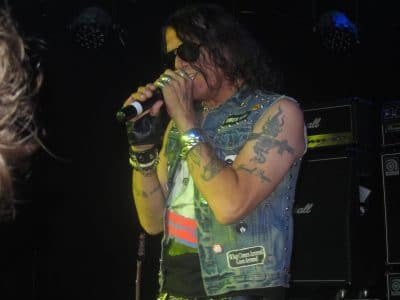 I had been a little bit bummed as the M3 Rock Festival was this weekend and I had elected not to go this year (mainly due to most of the headlining bands being repeats from the last two years) but seeing Pearcy live more than made up for it. Funny enough, Pearcy has a 2:20 pm start time today at the M3 Rock Festival so I imagine that he was either flying there this morning or he and his bandmates were driving through the night to Columbia, Maryland, USA to make their start time. As I was leaving The Rockpile, my thoughts were that I had just seen the best concert of the year thus far. Pearcy and his bandmates absolutely killed it at The Rockpile and I hope that it will not take another seven years for Pearcy to come back to Toronto, may it be with his own band or as the frontman for Ratt. Who knows? Maybe one day the hatchet will be buried once again and the classic line-up of Ratt (minus Robbin Crosby – R.I.P.) will reunite once again. 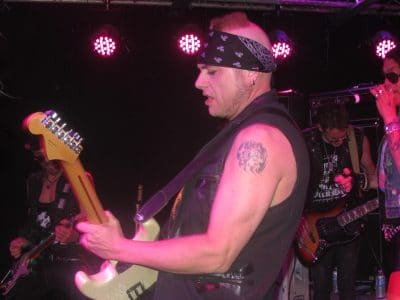