GOD IS IN THE HOUSE

The good — and even great — news about living in Toronto this summer is that there are so many hard rock/metal concerts to go to. This week alone, there were three potentially great shows to attend. On Monday, the iconic Guns N’ Roses was playing the Sound Academy, which is quite a small venue (a capacity of a little over 3,000) for a band of that stature. On Thursday evening, the Rockpile was hosting Dio Disciples and the next evening, it was hosting probably the best known hard rock/metal Christian band Stryper.

The bad news is that I simply do not have time to attend so many rock shows with work, my family, etc, so I have to choose which concerts to attend. Guns N’ Roses was quickly eliminated as soon as I found out that the cheapest ticket was a whopping $145 for general admission and a balcony seat was almost $400 — let’s get real Axl Rose. From what I heard, there was lots of room to maneuver inside the Sound Academy when Guns N’ Roses eventually played given that many chose not to fork out so much money for a real watered down version of the band with no Slash, Duff McKagan, etc. So it came down to seeing Dio Disciples or Stryper, and seeing as I had never seen Dio Disciples before they held the early edge over Stryper for that reason. However, I had good memories from the one Stryper show that I had previously attended in 2009. This is where the importance of opening bands came in. Dio Disciples had at least three, likely local, opening bands but I had never heard of any of them. Opening for Stryper were three presumably local bands including Revolution and J’Nai. My decision was now an easy one since I had already seen those two opening acts play live at the Rockpile and liked both of them.

I got to the venue a little before 9:00 pm and my choice to go see Stryper seemed validated immediately upon seeing the already packed parking lot — at least in front of the venue. While I did not encounter a line-up of any sort to get into the nightclub, at one point apparently there was a line of people going around the building. Upon entering the Rockpile, I noticed that there were more people inside waiting to see the second opening band than I would usually see for a headlining act on just about any other occasion. It seemed that I was on the cusp of witnessing something special happening. 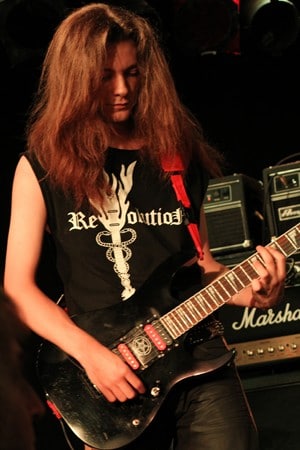 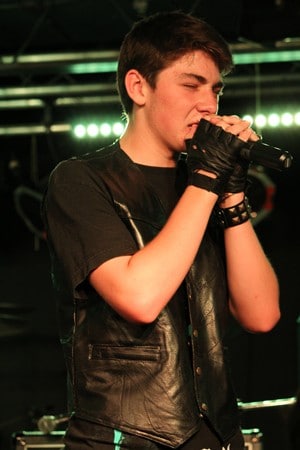 The first opening act that I saw — but which was the second of four bands on the bill — was Revolution. It seemed like it was “the kids are back” part 1. With the ages of the Revolution band members ranging from 15 to 17, I was essentially seeing a bunch of kids playing — age of course is relative depending on how old you are. Nevertheless, the band seemed to be playing like seasoned veterans for the most part. Alas, as the band was setting up their gear, I realized that I must have left my camera on the night before while downloading photos because the battery desperately needed to be recharged. I would now have to use my shitty cell phone camera for the photos accompanying this concert review. Luckily for me, during the wait in the sweltering heat between the J’Nai and Stryper sets, I ended up meeting and chatting with a number of fine folks including Rob, Aaron and Isaak. Having seen Isaak snap up some amazing photos during the J’Nai set with his massive camera, I asked him if he could forward some photos to me later on to use for this review. Isaak graciously accepted for which I am very thankful.

Back to Revolution — having had the opportunity to see the band open for Quiet Riot just a little over a month ago, I was now more used to guitarist Jamie Bekyarovich‘s brilliant and mesmerizing guitar playing. This time, what caught my attention was how good bassist Luc Michael Mascioli was as well. I was also more familiar with Revolution‘s songs given that I was hearing most of them for a second time. The band opened with one of my favorites from their own originals called “Iron Sword”. Unfortunately, Revolution only got to play six songs so they were off the stage fairly quickly. The band closed out their show by covering the brand new Black Sabbath — soon to be a classic — song “Loner”. It was a great but surprising choice given that Black Sabbath‘s ’13’ CD was released only about five weeks ago. Whatever the case, the song worked well and closed off a good set. 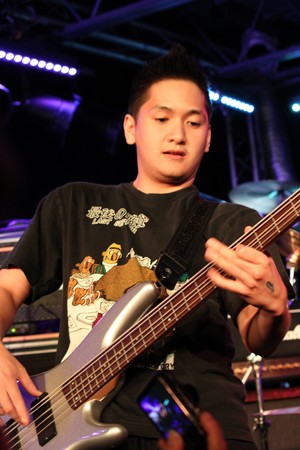 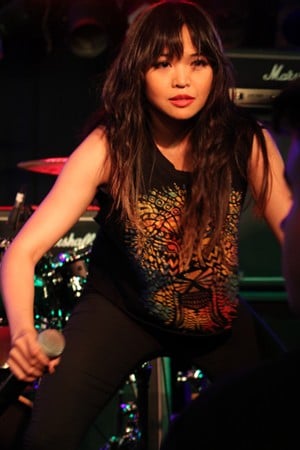 Next up was J’Nai. This seemed like “the kids are back” part 2. Although four of the five band members — with the exception of drummer Rui Cimbron who does not qualify as a kid appearance wise — are apparently in university, they look quite young as well. Again, age is relative depending on how old you are. Nestled behind speakers next to drummer Cimbron, lead vocalist J’Nai ‘announced’ the band before joining the rest of the group at center stage and kicking off their set with a rousing version of Rainbow‘s “Kill The King” — an excellent choice considering that Dio Disciples played just the night before. Next up was my favorite J’Nai song “Away From You” — a great song from start to finish that sounded awesome live. By the time the band launched into their third song, “In The Light”, there was no doubt that bassist Dave Alcordo and guitarists Richie Nguyen and Stephan Nakamura, and particularly J’Nai herself were going to expand lots of energy with all of their movements and jumping around — to the point of getting a major aerobic workout! All of the other faster songs from J’Nai‘s self-titled debut CD were played: “Accident”, “Skipping Stones” and “Defeat Them All”. During the latter song, there was a sort of scary moment for Nakamura when he did not catch outright Nguyen‘s guitar when the two tossed their own respective guitars to each other at the same time — which appeared to be a standard trick at each J’Nai show. Luckily, it was more of a scare and miscue than anything else since the guitar appeared to have suffered no damages. J’Nai closed off their energy filled set with their own unreleased song “Gone” and a cover of Guns N’ Roses‘ “Welcome To The Jungle”.

By the time that J’Nai finished their set, the Rockpile was packed with more people than I had ever seen before. Even the band merchandise booths that would usually be set up in the main concert hall were nowhere in plain view. Rather, they were tucked into a side room to allow more room for concert attendees. Having seen Stryper once before, I knew that it was imperative to stay in my spot near the stage after J’Nai‘s set despite the sweltering heat (apparently there is no air conditioning at the Rockpile) since it would surely be difficult to get back to that spot if I left it. Unlike other hard rock and metal bands, Stryper not only have the usual metal audience but also have a large following of Christians who might not necessarily be familiar with the other secular metal bands. This is likely the reason why the Rockpile seemed completely packed for Stryper, but nothing close to that for other ’80s era metal bands earlier this year such as Quiet Riot and Faster Pussycat. It also seemed like Stryper fans were coming from far and wide to see the band in Toronto. From the town of Fergus, about an hour and a half away, to the province of Quebec, about four hours away, to the country of New Zealand at the other end of the world — fans were coming from all over to see Stryper. I know about the New Zealand fan (I believe that his name is Craig) given that Michael Sweet pointed him out to the audience since this ‘super’ fan is apparently following the band to all of their tour stops. I have never been a big Stryper fan myself — I only own four of their CDs including the last three — but the band simply blew me away. The all original band line-up sounded fantastic, really tight, and unlike some of their ’80s contemporaries, the band members seemed to be in great shape. 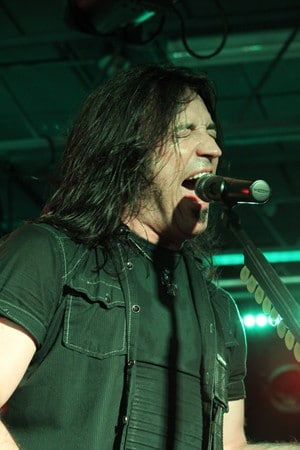 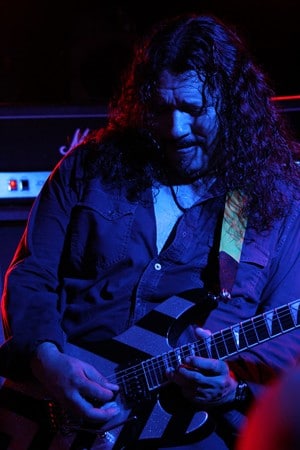 Stryper kicked off their set with the classic “To Hell With The Devil” and for the first eight songs or so, simply delved back into their ’80s catalog of songs. I was blown away by how good lead vocalist and guitarist Michael Sweet sounded — no wonder he was recruited to front Boston for a little while a couple of years back. The guy can hit all the notes and was also able to handle three rather diverse songs from a vocal perspective when Stryper played awesome renditions of KISS‘ “Shout It Out Loud”, Black Sabbath‘s “Heaven And Hell” and Van Halen‘s “Ain’t Talkin’ ‘Bout Love”. The latter song was a surprise considering that Stryper covered Van Halen‘s “On Fire” rather than “Ain’t Talkin’ ‘Bout Love” on their 2011 ‘The Covering’ album. In fact, the entire band sounded great including the vocal harmonies. Lead guitarist Oz Fox sounded fantastic and his guitar harmonies with Michael Sweet were right on the money. Unfortunately for drummer Robert Sweet his drum kit was way at the back of the stage and behind a large row of amplifiers. Sometimes, all you could really see was a blond mop of hair bopping around while he played. Michael Sweet was — as I expected — very articulate and good at interacting with the crowd regaling the audience with all sorts of interesting comments including that back in 1986, at least on the Sunset Strip, it was normal to see most guys wearing spandex with longer hair and more makeup than the women! 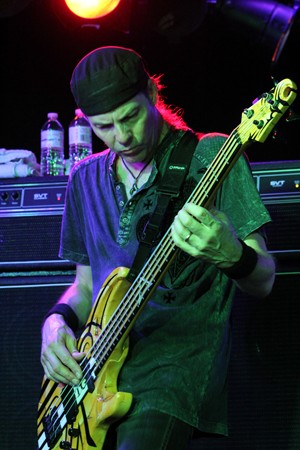 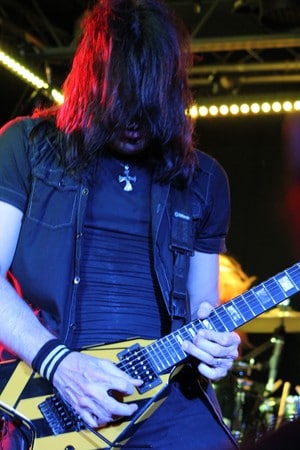 The audience was treated to one new song, “Marching Into Battle’, from Stryper‘s forthcoming new CD ‘No More Hell To Pay’. A good song built on a solid guitar riff, it did seem a little less upbeat than the rest of the tracks being played. Song highlights for me were “More Than A Man”, “Calling On You”, “The Way” and show closer “Soldiers Under Command”. Michael Sweet ended the night with a closing prayer, and I’m sure that there were some non-Christians in the audience but everyone seemed respectful nevertheless during the prayer.

Although I was unable to catch one of the many Bibles being tossed out into the audience by the Stryper band members throughout their set, one of the lucky fans who did catch one showed it to a bunch of us after the show. The tossed Bible had the Stryper logo on it, is quite small and only contains the New Testament. Accordingly, the bible verse (Isaiah 53:5) so prominent on just about anything related to the Stryper name would likely not be found. A quick check of the verse online revealed how Stryper might have got their name since Isaiah 53:5 (English version) states: “But he was wounded for our transgressions; he was crushed for our iniquities; upon him was the chastisement that brought us peace, and with his stripes we are healed.” I left the Rockpile venue thinking that out of all the concerts that I have attended this year — Stryper‘s show has been the best one of all. 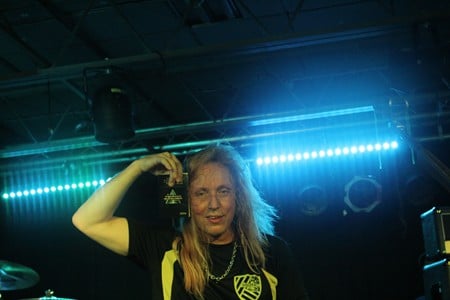 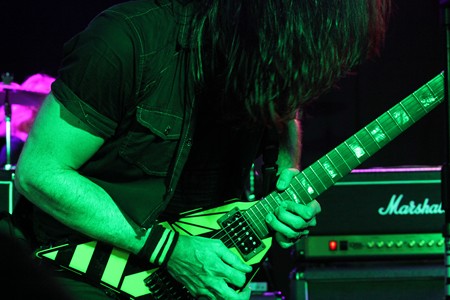