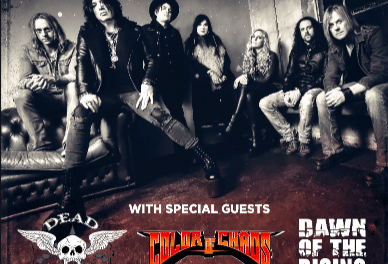 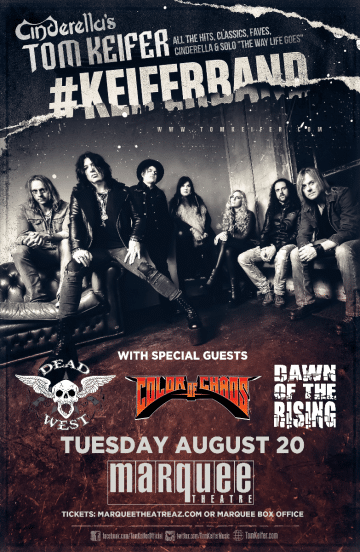 Tom Keifer was slated to play in Arizona on August 21st at BLK Live. That was posted on his website all along though BLK never posted an update beyond the Gilby Clarke concert set for last weekend. I found that strange but hindsight is always 20/20. Well, my son’s birthday is August 22nd and I don’t think it would be wise for me to be dead tired on his special day because I was out partying with one of my favorites the night before at BLK. Good news, though! The show was moved indoors and put back to August 20th at the classic Marquee Theater in Tempe. Again, I found this strange. But, it meant I could make it. So, rockin’ on Tuesday night, I went.

I missed the opening act entirely but was in time to catch Color of Chaos and Dead West. After Dead West performed, a lady asked me “Did you like them?” I said, “I did. I’ve seen them before at BLK Live.” She looked at me like my puppy just died and said, “Oh honey, I’m sorry. BLK closed!” She explained that Gilby Clarke got boned out of his pay for the show he was booked for and that the reason for the closure had to do with owners, who aren’t even in Arizona, feeling the venue was “too loud” and that they probably could use the real-estate value, given it is in Scottsdale, more than the revenue earned for the shows. Well, that sucks! I mean, it really does suck. But, you have to give props to Tom Keifer‘s management for finding a venue with about a week’s notice. Oh, and the lady ended up being the wife of the Dead West‘s rhythm guitar player. She really seemed to like me. I’m not sure why. I’m an asshole.

The Marquee is a small theater just outside Arizona State University‘s main campus confines. I used to go there a lot back in the day but it seems — though there are exceptions — to have gone a more mainstream, contemporary route with who they book in for shows. BLK Live had picked up the slack so much in recent years. The venue was fairly full… Not jam packed but it did OK for Tom Keifer and company especially considering the clusterfuck that was the date and location of the event. The opening acts killed it but I’ve seen both before and said positive things about them in prior reviews. They really should be more than just local support for some of these larger bands. But, that is the state of the music industry. If you have talent and play rock and roll, they don’t want to promote you.

Keifer hit the stage with one of his new tracks called “Touching The Divine.” It is a hard rocker, very heavy for his solo band. Tom sounded solid straight away but seemed to get better as the show went on. After the new cut, which isn’t the single put out, we went back to familiar territory with “Night Songs.” As the show went on, I started to really think about how great Tom‘s voice has held up considering all his vocal issues over the years. He said in an interview with That Metal Show that he has to do vocal work every single day to keep it strong. Well, he’s made good on that. He really does sound just about as strong as he did on the classic albums. There was a nice mixture of old hits and solo band material. I was pleased that the two songs off the first album The Way Life Goes that were played also happen to be my two favorite — “Solid Ground” and “It’s Not Enough.” I will confess I was surprised that none of the myriad of ballads off The Way Life Goes made it to the set. I do like those songs. But, I was happy to hear him stick to more heavy, rocking tunes. 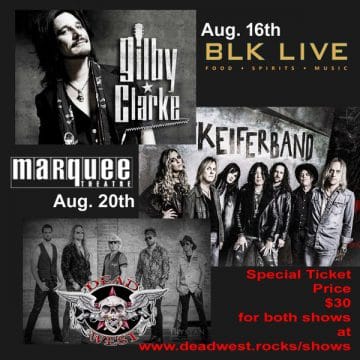 The audience there was really strange. I was there, dead tired after having worked from 4 am and walked two miles in 115 degrees to pick my son up from school that day. But, there were largely guys my age and older, and girls who either were of various ages or wore it better than others. You haven’t lived until you have a possibly intoxicated woman in tight pants scream in your face, “When I was a young boy” to the tone of “Somebody Save Me” while ramming her ass and tits into you trying to get by. I don’t normally remark on this stuff but I felt like I was doing something wrong being married. She just brushed past. But, it was an enjoyable brush… And, she more than likely was shit faced. Truly an experience. But, of all the lyrics, “Since I was a young boy.” Well, shit.

Tom‘s wife Savannah was not at the show due to a sports injury suffered by his son that required surgery. I saw her with the band in 2013 and she does deliver a nice harmony to the group. But, while we all wish she were there and wish their son well, I think people were happy with the show we were still getting. I’ve got to tell you, the new solo song “The Death of Me” is one of the most bad ass songs I’ve heard a veteran band deliver in quite some time. Damn! It is powerful and ass kicking.

I ended up chattting with a few people at the show at various times. I don’t know if I looked like shit because I was dead tired or if I just seemed like a nice guy but a few guys and gals were talking and they were all discussing why Cinderella isn’t touring and why it is just Tom. I thought this answer but didn’t say it. Now I will. “He doesn’t need them.” Now, I know that is a brash remark. Everyone wants to see these guys with their original line-up and all that. And, I mean no disrespect to the rest of his band. But, something was different about this Keifer band in 2019 than when I saw them at the State Fair on ’80s night in 2013 playing after Tom Waite but before Berlin… I left before Berlin played. I was only there for Keifer anyway. The band sounded more Nashville in 2013… If you hear “The Way Life Goes”, you might get what I mean… Maybe a little more country at the risk of sounding like I’m talking about the Osmonds. The band I saw, which may well be all the same guys — I’m not sure — was heavier, more rocking. Hell, if I didn’t know better and you told me it was the rest of Cinderella, I would have believed you. Very much a hard nudge back to hard rock. And, for a rock and roll junkie like me, that is all I could ever ask for.

So, if you are on the fence about seeing the Tom Keifer Band when they come near you… If you dig Cinderella, you’ll more than get your money’s worth!

Video footage of crowd at Tom Keifer‘s concert at the Marquee Theatre in Tempe, Arizona, USA on August 20, 2019:

Tempe, AZ… Thank you all for a kick… – Tom Keifer (Official)

Tempe, AZ… Thank you all for a kick ass night!!! #keiferband 💀