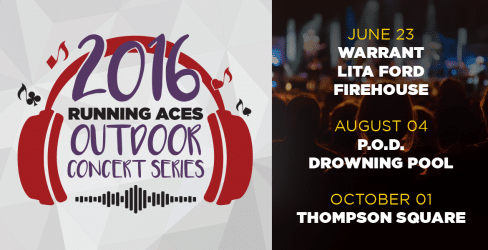 On Thursday June 23rd, Metal Headz Media had the pleasure to see Hoodlum Johnny, Firehouse, Lita Ford and Warrant all on one stage. Since the show was on a Thursday, I was a little skeptical on how the turnout would be for the event.

Hoodlum Johnny is a local band from Miinesota that got the show off to a rockin’ start. I really didn’t get to see much of their set, as I was handed some meet and greet passes for the night and Firehouse were having theirs during the set. From what I was hearing and briefly saw, they were really good and fit the bill nicely. They did get some praise from Firehouse as a few members of this band worked for ARM [Artist Representation and Management] which is the management company that works for Firehouse, Lita Ford and Warrant. 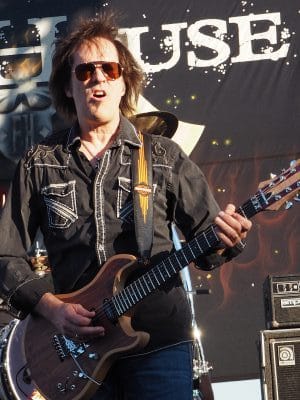 I have seen Firehouse live many times, and they have never disappointed, so I knew I was in for a good show. They kicked off the show with a track from their first album — “Shake and Tumble.” Firehouse is celebrating their 25th Anniversary this year and they have not lost a beat. When they are on stage, they own it! They are there to play for their old fans and to win over some new fans. Michael Foster just kills it on the drums. He plays his heart out every night and you can tell he is just having a blast banging those sticks. Allen McKenzie does a fantastic job holding down the rhythm and also contributing some fantastic back-up vocals to keep the music in synch. I also enjoyed seeing the Guinness bass guitar he was sporting for most of the night too. That thing looked slick. Bill Leverty has to be one of the most underrated guitar players to come out of the “glam rock” music scene. He just rips on the guitar and all of his solos were note for note.

CJ Snare still has it! He can still sing his heart out and hit all the notes from the previous albums. One in particular was when they played “Overnight Sensation.” Snare held that note for a long time and it sounded amazing! The crowd made sure they were appreciating it too my showering a thunderous applause. Their set focused on a lot of the songs from the self-titled album (“Don’t Treat Me Bad,” 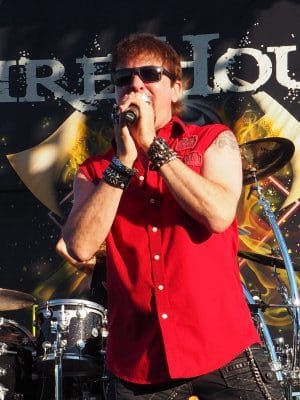 “Outta Be A Law,” “Love of A Lifetime”), but they also played a few from their second release Hold Your Fire (“When I Look Into Your Eyes” and “Reach For The Sky”). I know I mentioned this in my other review of them when they played with Winger, but if you have never seen these guys live, you have to do yourself a favor and check them out. They will win you over and you will make damn sure you will not miss them again when they come to your town. I also had the honor of meeting them before their show, and they are top notch men that love what they are doing and love their fans. 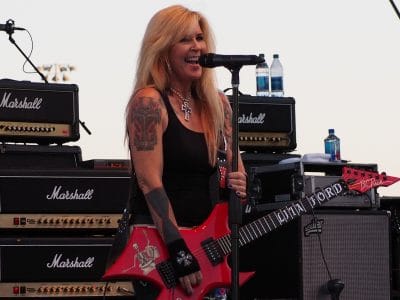 Next up was none other than the rock goddess herself, Lita Ford. This was my first time seeing her live and I was so excited that I could cross another one off my list of artists that I yet have to see live. Lita came out showcasing her red guitar and started playing the opening riff to the lead off track “Gotta Let Go” from her Dancin’ On The Edge album. I could tell the crowd was really excited to see Lita live as well, as I don’t think she makes it to Minnesota all that often. Second song of the night was “Larger Than Life,” and Lita and her band were sounding amazing and were very entertaining to watch live. Lita’s band is comprised of Patrick Kennison (Union Underground) on guitar, Bobby Rock (Nelson, Alcatrazz, and more) on drums, and Marty O’Brien (Tommy Lee, We Are the Fallen, and many more) on bass.

I was not able to catch the whole set from Lita, as Warrant had their meet and greet during her set. I was disappointed that they had it during her set, but I was also excited to meet them. By the time the meet and greet was done, I was able to catch the last three songs from Lita. She played one of her classics with her first band The Runaways in “Cherry Bomb.” That was a 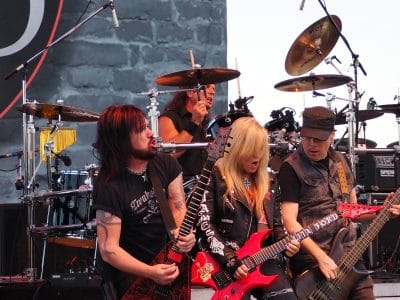 crowd favorite and the whole place was singing along. The last two songs of the night were her biggest hits as a solo artist, the Ozzy Osbourne duet “Close My Eyes Forever” (which Kennison did Ozzy’s vocals and did an outstanding job) and “Kiss Me Deadly.” 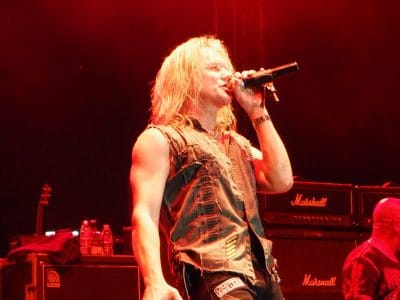 The headliner for the night was the “Down Boys” themselves — Warrant. Now, I am a diehard Warrant fan and was very saddened when Jani Lane passed away a few years ago. I know Robert Mason (Lynch Mob) has some major shoes to fill, not only as a songwriter but as a vocalist. Lane was truly a talented musician. But I have to admit, Mason does a tremendous job filling those shoes. I will admit, I didn’t think Jamie St. James (Black N Blue) was a good fit for Warrant, so I am truly excited that Mason is singing for them now. I first saw Warrant with Mason right after he joined the band (when they fired Lane) and I was very skeptical of how they were going to sound. After their first song that night, I was shocked and pleased at how well Mason was sounding and how he did all those songs justice. So, if you are one of those fans that chooses not to see Warrant because Lane is not fronting the band, you are missing out on one heck of a show. With the exception of Lane, Warrant does have all the original members of the band in the current line-up. Steven Sweet (drummer) and Joey Allen (guitar player) came back to the band when they tried to do the reunion tour, but Lane couldn’t keep it together, so they had to fire him. Jerry Dixon (bass) and Erik Turner (guitars) were the two who stuck it out through it all. 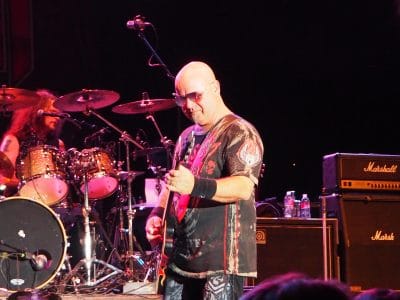 Thursday night’s show was a special night for Allen, as it was his birthday. He even got serenaded by the audience who sang him “Happy Birthday.” Allen was a madman that night. He was running all over the stage and it was looking like he was having the time of his life. Allen, along with Erik Turner, are also a couple of other underrated guitar player’s that came out of the “glam rock” scene. Allen and Turner were nailing all the solos on stage and some of them were even sounding better live than on the album. Those two really do make a great guitar dueling combo. Sweet and Dixon helped provide the backbone to the beat the whole night and kept the place moving. And Mason, what more can I say? That guy has some pipes on him and has an amazing voice. He does an outstanding job owning that stage and asking a lot from the crowd, which they give back because this band is that good live! 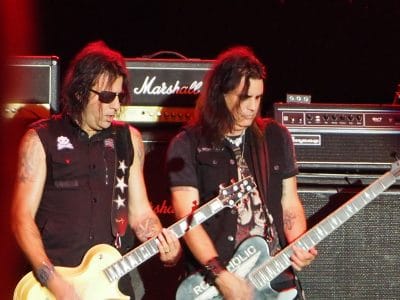 Warrant were off to a commanding start with “Big Talk” and then right into “DRFSR.” The set list was mostly from their first two albums and one track from the Rockaholic album, “Sex Ain’t Love.” I was a little disappointed that they didn’t play a full song from their Dog Eat Dog album. They did play a bit of “All My Bridges Are Burning” during the track “Song And Dance Man.” I know they had to keep the list a little short for this show as there were three other bands on the bill, so I can only hope to see them play a full setlist very soon so I can hear some of those songs. The highlight of the night for me was when they played “So Damn Pretty (Should Be Against The Law)” as that is one of my all-time favorite Warrant songs. I was also happy to hear that they threw in a couple other deeper tracks — “Sure Feels Good” and “Song And Dance Man.” Those two are some of my favorites off the Cherry Pie album. Before they played “Heaven,” Mason wanted everyone to take out their phones and light up the place with their screens. That was a really cool sight to see. By this time, I knew things were coming to an end because I got to see a list of the artists’ set times and they had a VERY FIRM cut off time of 11:00 pm that night as that is the city’s curfew. They ended the night with “Uncle Tom’s Cabin” and their big hit “Cherry Pie.”

I want to take the time to thank Warrant, Lita Ford, and Firehouse for taking time before and after their sets to meet with their fans. I know I truly appreciated it and I am sure everyone else did. Thank you for kicking our asses for all of these years and I hope there will be many more years to follow. 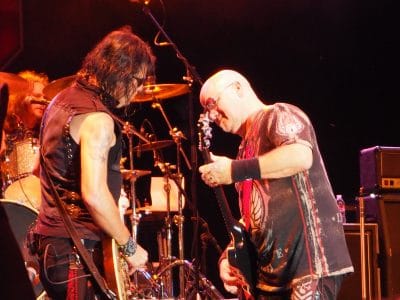