Canadian hard rockers Crown Lands consisting of the duo of guitarist Kevin Comeau and lead vocalist/drummer Cody Bowles have released a video for their song “Mountain” via the website Global Citizen. 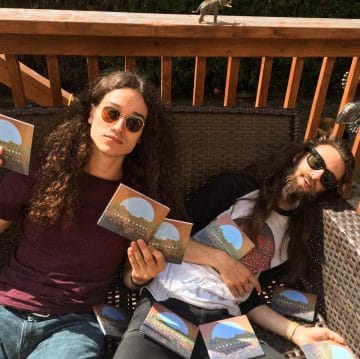 An excerpt from the article in Global Citizen states:

“Both 23 years old, they’re ready to use their music to tackle some big issues in Canada and around the world.

That’s why they decided to write “Mountain,” a blues-derived rock song that addresses the mistreatment of Indigenous people at its core. They’ve chosen to premiere their music video on the Global Citizen platform, in hopes of reaching a vast audience dedicated to social change and ending extreme poverty.

Canadian listeners will quickly understand the meaning behind the lyrics in “Mountain” and its video leaves little to the imagination.”

Sleaze Roxx caught Crown Lands playing live at the Horseshoe Tavern in Toronto, Ontario, Canada in late January 2018 and stated as follows in its concert review: “The crowd was packed to see them play. Bowles and Comeau were all smiles and hugged each other before starting to play. There’s not many drummers out there who also handle lead vocals so that was neat to see right off the bat. Bowles had a nice clear voice and had a pretty boy look to him. Comeau was the bearded long haired crazy man on stage jumping around whenever he could on the small stage made even smaller with all of the Last Bullet gear behind them. Athough Bowles was the lead vocalist, it was mostly Comeau who addressed the audience between tracks. While the songs were definitely enjoyable on a first listen, the music did seem a little thin in that you only heard the guitar, the drums or the guitar and drums together.”