It is no secret that former Skid Row lead vocalist Sebastian Bach has publicly made it known that he wants to reunite with his former bandmates including guitarist Dave ‘Snake’ Sabo and bassist Rachel Bolan to do a Skid Row reunion. The talks seemed to be heating up just as Guns N’ Roses were about to embark on their Not In This Lifetime tour with their “reunion” of classic line-up members Axl Rose (lead vocals), Slash (lead guitar) and Duff McKagan (bass). 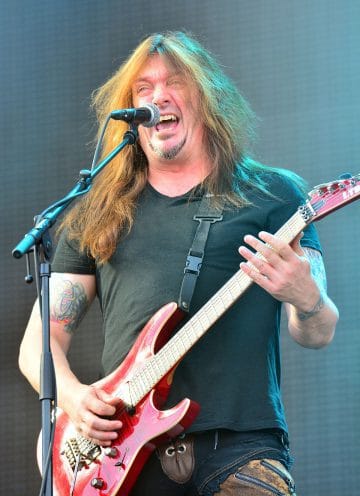 Sabo was recently interviewed on the Trunk Nation show on SiriusXM channel Volume.

The guitarist stated as follows during raw interview (as provided by Blabbermouth with slight edits): “… there was definitely dialog that was going back and forth and there was talk [last year about a possible reunion with Bach]…. I think everybody was entertaining the idea… And I think, really, what it ended up being was we realized that whatever it was that tore us apart years ago still existed…. We got offered a lot of money… There was a lot of stuff that’s been said about what happened and tours being booked… That didn’t happen — tours were not booked. Any offers that came in came through to me and, ’cause it’s our band. So there was a good amount of money being offered. And then with the dialog that went back and forth, it got ugly again.”

[The disagreements between Skid Row’s core members and Bach] “had nothing to do with money. I’ll tell you straight up — no one was making was more than anybody else… That was one of the things that we said… Rachel and I and Scotti, we were, like, ‘This is easy from that perspective.’ I’m not gonna sit there and do it any other way. It was more about control, I think. Other people having a desire to have more control over this thing than we were willing to give. And it was not about anything other than this is our band…. This is not ego-driven, I promise you… It wasn’t about me making more money than you, or you making more… it wasn’t about that at all. I guess it was the personality conflicts that existed before, 20 years ago [that are still there].”

In terms of a possible reunion with Bach in the future, Sabo stated: “I always never say never… I guess that’s like my way of not committing to saying, ‘No, it will never happen.’ The chances of it happening, I mean, I would say they’re slim to none, but I never say never. But I will say this: in this day and age, we live in the moment, man. I mean, I’m living right here, right now in the moment. And I love having ZP in the band.”