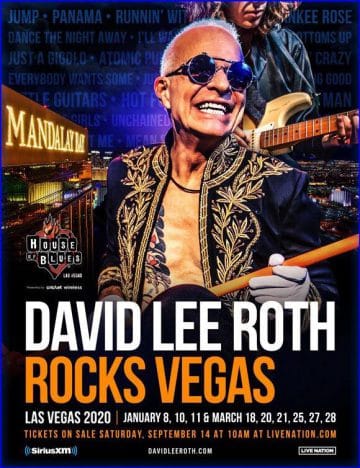 Big news from Van Halen‘s frontman David Lee Roth as the singer will be performing nine shows at Mandalay Bay in Las Vegas, Nevada, USA in January and March 2020.

Van Halen have continued to lay low despite Roth hinting early this year that the group would be playing Yankee Stadium during this past summer.

Roth also indicated back in mid-June 2019 that he would be meeting up with the Van Halen brothers the following week but it appears that nothing has really come of this since the Van Halen frontman has announced a mini-residency in Las Vegas rather than any touring plans with guitarist Eddie Van Halen, drummer Alex Van Halen and bassist Wolfgang Van Halen.

Setlist.fm lists Roth’s last solo concert at the Edmonton Event Centre in Edmonton, Alberta, Canada on November 7, 2006. The singer has done some appearances in recent years where he performed a handful of songs.