Canadian rockers Dextress have announced via their Facebook page that they have a new bassist named Eric Paulin. 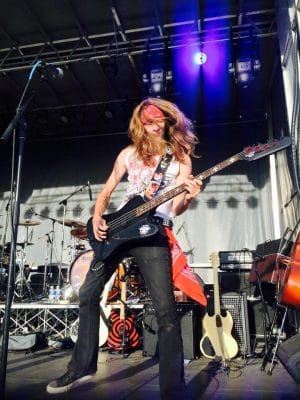 Paulin replaces original bassist Christian Garcia while Dextress are in the midst of recording their follow up to their debut EP The Demo.

Sleaze Roxx stated the following in its review of The Demo back in October 2014: “The songs on The Demo are simple in that they are catchy and riff based, yet sophisticated by offering many different tempos and don’t seem to follow traditional song structures. I can’t say enough about the four songs on the EP, I just wish there were more of them to listen to. It is hard to pick my favorite track but I will go with “Red Eye Remedy” due to the infectious and melodic (yet basic) guitar riff around which the song is built on, the vocal harmonies — I want more of that — and the absolutely scorching guitar solo towards the end. The production, or sound, on The Demo is not the greatest but it is good enough for me to want to continue listening to the EP and appreciate just how good these four young musicians are. There is not much more to say except that any lover of the sleaze rock genre is likely to really enjoy Dextress‘ The Demo. I already can’t wait to see what Dextress comes up with next.”

No reasons were given by Dextress for Garcia‘s departure from the band but back in early October 2014 when Sleaze Roxx interviewed Garcia, singer Jackson Taylor and guitarist Mark Janz, Garcia advised as follows when asked about what attracted each of them to the ’80s hard rock/heavy metal sound that the band was playing: “I actually never really got into that era of music. I never really even heard anything from that time until I met Jackson and Mark. It really isn’t something that I’d listen to if I had a choice. I mean, I like playing it and I like adding what I can to it.”

Interestingly, there are only three band members listed (Taylor, Janz and Paulin) on Dextress‘ Facebook page which suggests that drummer Marcos Rodriguez may be getting replaced in the near future.