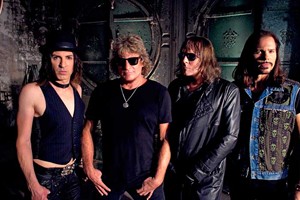 Don Dokken Says George Lynch Was “A Great Guitarist, But His Day Is Over”

While promoting the new Dokken album ‘Broken Bones’, frontman Don Dokken has squashed any full-blown reunion rumors by stating that former bandmate George Lynch “will go down in history as once being a great guitarist, but his day isover!”

When asked by Melodic Rock Fanzine if he considered it a positive thing that Dokken has never experimented with a reunion Don Dokken replied, “I would love to do one more Dokken record some day with the original members. Jeff (Pilson), Mick (Brown) and I get along great but George (Lynch) continues to talk negative about me, I have no desire to play with someone that is emotionally unstable and full of hate.

“Jon (Levin) and I are best friends and we both understand the Dokken sound, George always wanted to change it,” continued the vocalist. “George continues to say he believes that I was the weakest member of the band, he forgot who wrote a large part of our music and hits. Narcissism is a disease of the mind, and I think it’s too late for him to change and find spiritual peace in this life time. The band is called Dokken, not Lynch, Jon Levin was always a fan of George’s playing. He has always spoken of him with respect because Jon has class. You can listen to ‘Broken Bones’, T&N, and Lynch Mob and let the fans make their own decision. George will go down in history as once being a great guitarist, but his day is over!”

Regarding ‘Broken Bones’ Don Dokken concluded, “The CD title is about everybody that has had troubles in there life, love, health, lost love, heartbreak, death — nobody goes through life without a few broken bones metaphorically. Most of us learn from our past mistakes but some people do not, what does not kill you makes you stronger. The pain in our lives inspires us to make music, and the happiness as well inspires to write. We are all damaged.”

Don Dokken’s complete interview with Melodic Rock Fanzine can be viewed in issue #52 at issuu.com/frontiers_records.