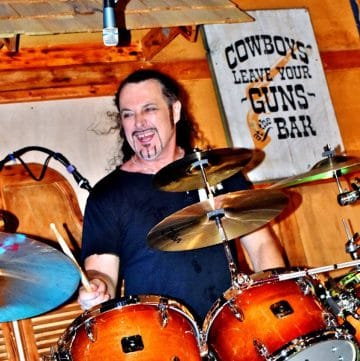 The drummer spoke about W.A.S.P.‘s controversial and dark K.F.D. album released back in 1997 [as translated by Sleaze Roxx]: “Helldorado was so different from K.F.D. because we destroyed our female following with K.F.D. [laughs]. As groundbreaking and theatrical and awesome that tour was, in a way, it knocked the band down. The cross and the nun and fucking the nun and pulling out the fetus and stabbing it on the knife cod piece and holding it up as if in victory — it was too dark. Women couldn’t relate to it you know but it was theatrical and impactful. But we destroyed our following. I mean we really did. We brought the numbers way down. But Helldorado was our attempt — Blackie [Lawless] was like, ‘OK. We pushed it too far. We better do a fun record.’ You know, so we did “Cocaine Cowboys,” “Dirty Balls” and we started getting audiences excited again. Women started coming back. We started getting laid again. It was a fun time. We had fun doing that record.”

Sleaze Roxx stated the following in its review of W.A.S.P.‘s ‘K.F.D. record: “What came next in the form of Kill Fuck Die was simply awful. It was an awful album when I first heard it 20 years ago and it still is a terrible album as I am listening to it today.

Why is Kill Fuck Die such a dud of an album? First of all, Blackie Lawless decided to go “industrial” changing W.A.S.P.‘s trademark sound in the process. Not even the return of guitarist Chris Holmes could save the album from mediocrity. Second of all, W.A.S.P. decided to forego melodies for what can only be qualified as noise. Third of all, and this is more a personal reason, Kill Fuck Die was so bad that I literally stopped following W.A.S.P. for ten years or so.”