With the rumoured Van Halen tour for this summer having seemingly not gotten off the ground and comments from radio mogul Eddie Trunk based on hearsay that 64 year old guitarist Eddie Van Halen is not doing well health wise, All That Shreds has posted a photo on Facebook on June 20th of what the guitarist reportedly looks like these days.

The following succinct message was posted on All That Shreds‘ Facebook page on June 20, 2019:

“Some people are saying EVH doesn’t look well in this photo….”

“At this point I think I think the ship has probably sailed for Sammy [Hagar] and Van Halen. I mean, if they were gonna do that, they probably would of done it all and I don’t know what’s going on with Eddie Van Halen. I’ve heard some rumors which I’ve I heard and hope are not true. I really hope Eddie is okay and I hope we get something from him in any configuration, in any way, at some point soon. However, I don’t think it’s going to happen this year and I don’t think it’s going to be with Sammy. Although, one thing is pretty obvious and if you heard the track I played earlier today from Sammy’s new record, the guy can still sing. Sammy can still sing amazingly well.”

You can read further excerpts of what Trunk had to say as transcribed by Alternative Nation at the latter’s website.

Wikipedia states the following about Eddie Van Halen‘s health over the years (with slight edits):

“Suffering from lingering injuries from past high-risk acrobatic stage antics and crashes, Van Halen underwent hip replacement surgery in November 1999, after his chronic avascular necrosis, with which he was diagnosed in 1995, became unbearable. Van Halen began receiving treatment for tongue cancer in 2000. The subsequent surgery removed roughly a third of his tongue. He was declared cancer-free in 2002….

Van Halen has struggled with alcoholism and drug abuse. He has stated that he began smoking and drinking at age 12, and that he eventually needed alcohol to function. Van Halen entered rehabilitation in 2007. In a 2015 interview, Van Halen stated that he had been sober since 2008.

In August 2012, Van Halen underwent an emergency surgery for a severe bout of diverticulitis….”

The above photo was also posted on the VH Trading message board on May 17, 2019 with the following description: 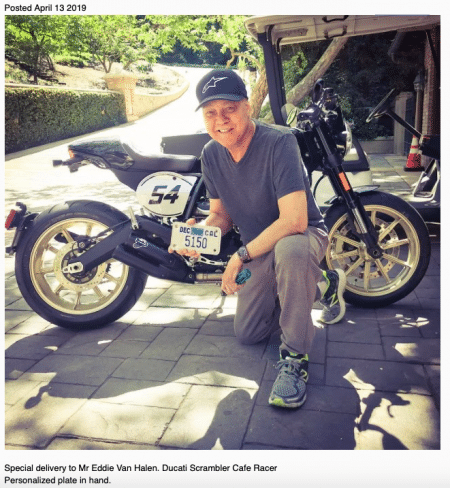