Former Stryper bassist Timothy Gaines is wasting no time after being dismissed from the Christian rock band as he has announced that he has a new band that he described as a “super group of sorts” that will be unveiled soon. 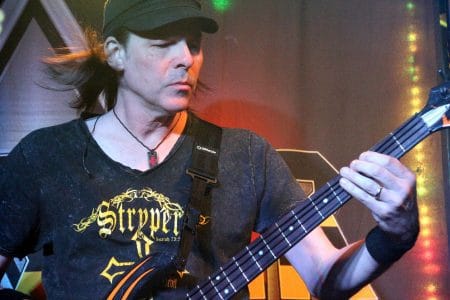 The following message was posted on Gaines‘ Facebook page back on September 9, 2017:

Wikipedia states the following about Gaines‘ work other than Stryper (with slight edits):

“…After Arcadia High School, Gaines joined the band, Stormer, with whom he recorded a demo and toured extensively in Los Angeles and Hollywood’s Sunset Strip.

At the time Gaines joined Stormer, they had already been a popular band for 10 years in the Los Angeles area. The lineup, at the time, consisted of Tom Hardy on vocals, Steve Hall on drums, Stephan Shawn on guitar, keys and vocals, and Donny Simmons on lead guitar and vocals.

In an interview regarding Stormer, Gaines recalled, “We signed a deal with an indie label called Rockwoodz Music out of Phoenix, Arizona and they put us in the studio to record an album and a Christmas single. Well the single was the only thing that ever made it to vinyl and 500 singles were sent out all over the US to radio. We got some good reviews for the single in some trade magazines but nothing ever happened with the band. For whatever reason, Rockwoodz went belly up and the album was never released. We did some small tours around the southwest but eventually I was to leave the group.

In 2008, when asked if the demos will be remastered and made public, Gaines replied, “I doubt if anyone can find the Masters. We are talking of having a Stormer reunion in the near future. We may decide to record it.” Gaines occasionally collaborated with Donny Simmons and Tom Hardy when he was not working with Stryper….

…After Stryper, Gaines played in Rex Carroll‘s project King James, along with Stryper alum Robert Sweet. He recorded with Tourniquet on their Crawl to China release as well. Afterward, he formed SinDizzy with former Stryper guitarist Oz Fox, and released one album, He’s Not Dead.”