After the Dish Post site reported less than three days ago that a Guns N’ Roses worldwide tour was days from being announced, former Guns N’ Roses manager Vicky Hamilton posted the following message on her Facebook account on November 12, 2015 about one hour ago: 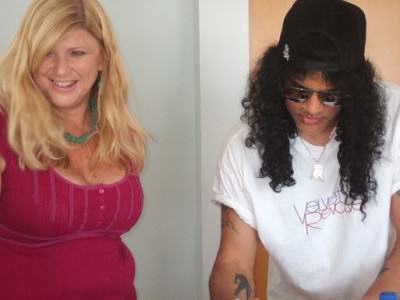 Hamilton is known amongst other things for being Guns N’ Roses‘ manager early on in the band’s career.

“Early in 1984, Vicky got a call at Silverlining Entertainment where she was an agent representing rock acts. Axl Rose called Hamilton, he wanted to bring her a demo, and she did not have a way to play it in her office. So she asked him to mail in a demo, he responded, “I have a ghetto blaster, I’ll bring it and play it for you.” Hamilton agreed and when Rose and Izzy Stradlin showed up an hour later, Hamilton booked Hollywood Rose (Rose and Stradlin‘s band prior to Guns N’ Roses) sight unseen based on the strength of that demo…

Hamilton was also booking Stryper and Slash‘s band, Black Sheep. Vicky introduced Slash to Axl when Hollywood Rose opened for Black Sheep and Stryper at the Music Machine, in West LA. Shortly after Chris Weber (guitarist of Hollywood Rose) departure for New York City, Slash became the guitarist, followed by Steven Adler on drums and Duff McKagan on bass. The original lineup of Guns N’ Roses was then born. Hamilton a big supporter of the band began to take on management duties when they moved into a rehearsal space near Howie Hubberman‘s guitar shop, Guitars R Us, which was off Sunset. The band was always in trouble with the law, the LAPD was looking for Axl Rose. Slash convinced Vicky to let Axl hide out at her apartment until it blew over. 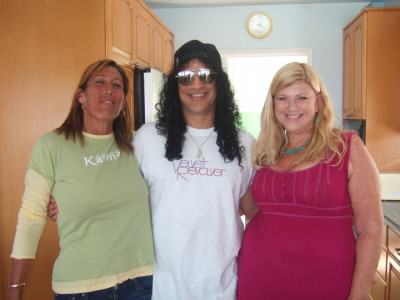 Over the next six months, all the members of the band (with the exception of McKagan who lived with his girlfriend) moved into Hamilton‘s one bedroom apartment on Clarke St. in West Hollywood, which she was already sharing with Jennifer Perry.

Hamilton booked many live shows for the band, got them a lawyer and took many meeting with major record companies. Vicky convinced Howie Hubberman to invest $25,000 in gear, clothes and rehearsals. As a result of her efforts and the band’s talent, a major label bidding war ensued and on March 26. 1986, Guns N’ Roses signed with Geffen Records.

Hamilton took an A&R consulting job at Geffen Records soon after agreeing to let the label find the band major management. She went on to manage Darling Cruel, Faster Pussycat, The Lostboys and Salty Dog securing them all major record deals. Hamilton later took a full-time A&R job at Geffen Records and brought in deals for Salty Dog, Rick Parker, Half Way Home, I, Napoleon and The Graveyard Train. Hamilton worked at Geffen Records from 1988 to 1992. Guns N’ Roses did not pay back the loan to Hubberman, and this resulted in Hamilton suing the band, the matter was settled out of court. 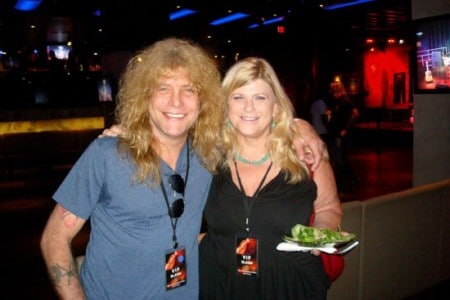 In an interview with Legendary Rock Interviews, Steven Adler was asked.

LRI “What did Vicky Hamilton do to really set the table for Guns N’ Roses?”

Steven Adler: “What didn’t she do? (laughs). I love Vicky Hamilton. There are probably four or five people tops that I will be mentioning by name at the Hall of Fame and they are certainly among the people who truly deserve to be thanked. I love Vicky and Marc so much because they truly, truly believed in our band and put their own asses on the line for us. The Vicky thing was devastating to me personally. It was just like this reunion bullshit with Axl in that I had no say in it whatsoever. I didn’t want to see Vicky leave as our manager, not at ALL, but a couple, a couple of the other guys did. They were concerned and saying “Well, she’s a woman and people are thinking she’s not doing as good of a job as a man could do”. I did not feel that way and I was very hurt when we could not take her with us as our career went forward.”

LRI: “Were you there when Kim Fowley was with Axl and the others and was suggesting that Vicky was too “pretty” to be a manager?”

Steven: “Yes I was and while Kim Fowley might not have been that big of an influence personally on Axl, he was an influence as far as what he had accomplished in the business. Axl agreed with Kim and I didn’t. I knew that she was great and she still is. It was beyond ridiculous to say that a woman couldn’t have impact on our careers because as I knew full well that Teresa Ensenat and Vicky Hamilton were every bit as important as Tom Zutaut to our success. Axl was all worried about having women involved in our careers when two of the three main people involved in us making it were women! It made no f****ing sense to me that he couldn’t see that while some women were crazy as f**k some of them are freakin geniuses. Vicky Hamilton is not only crafty but smart as a whip and knew better than anyone how to guide our career.”