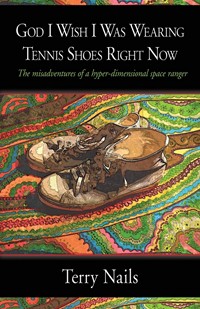 ‘God I Wish I Was Wearing Tennis Shoes Right Now’ is part spirited autobiography, part iconic cultural honoring, part incidental history lesson, part psychedelic manual and part philosophical exploration. All together one wild trippin’ adventure weaving strands of mishap, misfortune, merriment, marvel and miracles to share with us “the small sentence” that is a contribution to the universal tale.

“The book is pretty much focused around music,” Terry Nails tells Sleaze Roxx. “Whether it be my family’s musical history, my personal playing history or a view of the music scene in San Francisco during the the late ‘6os and into the ’70s from the inside — though that is by no means all there is to the book. It’s part history lesson, part psychedelic expedition and part drug-a-log. It’s part skateboard history and it has elements of tragedy and drama, though for the most part it’s fairly humorous. It also has a decent amount of philosophical musings thrown in for good measure. But the weirdest part of the whole thing is that it is all true.”

Nails, who worked with Ozzy Osbourne on the ‘No More Tears’ album and appeared on Johnny Crash’s underrated debut ‘Neighbourhood Threat’, reveals that he has thought about writing a book for awhile now. “I thought about it for a long time but I didn’t actually start seriously writing until my dear friend Del James (road manager for Guns N’ Roses) gave me a few pointers about the fundimentals of writing as he is a very serious writer himself. I had a great support team during the process, starting with Del who mentored me through it. My wife Pam who is one of the most amazingly astute people I’ve ever seen and Dr. Dennis Mckenna who is great scientist/writer and brother to the late great Terence Mckenna.”

Nails, who’s resume also includes collaborations with artists as diverse as Paul Rodgers (Bad Company), Tommy Tutone, Bill Ward (Black Sabbath), Ian Astbury and Bill Duffy (The Cult), Axl Rose, Slash and Matt Sorum (Guns N’ Roses), The Pointer Sisters, Nikki Sixx (Motley Crue), Lemmy Kilmister (Motorhead), and Disco singer Sylvester, concludes, “It just seemed like it was time. Besides, I’ve had so many people tell me that I should write a book about some of the weird stuff I’ve found myself involved in that I decided that I might as well listen to them.”