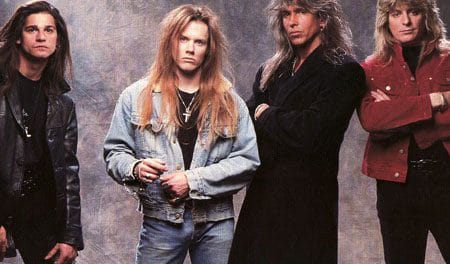 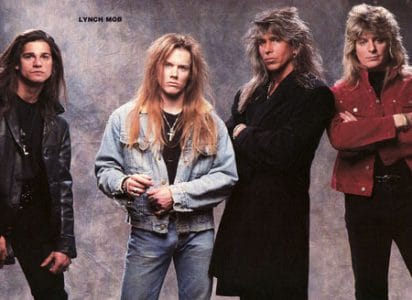 Mason handled lead vocals on Lynch Mob‘s sophomore self-titled album that was released back in 1992. Sleaze Roxx stated the following in its review of Lynch Mob‘s self-titled album in 2010: “Lynch Mob was the second release, and self-titled effort, from the band of the same name. Formed in 1989 by guitar virtuoso George Lynch after his departure from Dokken, this version of Lynch Mob featured the now legendary Robert Mason (Big Cock, Cry Of Love and currently carrying Warrant to their best performances in years) on vocals and, quite simply, this album is the best thing Lynch Mob ever did.

I’m a huge George Lynch fan, so his own band done with his own style, signature riffing and sung by the ‘BMF’ was always going to work. Sure Oni Logan did a good job on Lynch Mob‘s debut Wicked Sensation, and an even better job on last year’s Smoke And Mirrors, but this just smacks those albums around. This record was stigmatized by poor sales and the unfortunate timing, as grunge was riding a crest at that time, an unstoppable wave. If Lynch Mob had been released a few years earlier it would have been huge because it has so many classic sleazy riffs, incredible vocals and, quite frankly, if your good lady doesn’t look at you with a twinkle in her eye then you’re not playing it loud enough.”

Lynch also spoke to I’m Music Magazine about Lynch Mob‘s debut album Wicked Sensation which came out almost thirty years ago and the interviewer’s surprise that many are not aware of the group’s new album The Brotherhood. The guitarist stated: “It’s probably a lot about timing; you can’t control the timing of the planet and the cultural tides. We came out with Wicked Sensation right before the flannel, Seattle blaze so there you go. If that record had come out two years earlier, it would have been the biggest thing since Tiramisu. It is a challenge and I hate to call it the marketplace but we exist in it in the free world and in that reality so we have to think in those terms. In the market place, my name is more recognizable and I can go out and make more money as myself rather than with the band which frustrates me because I am not a solo artist and I’m not built to be a solo artist. I don’t enjoy that; I enjoy being with my friends and sharing the ups and the downs, the trials, the tribulations and the rewards with them otherwise, what’s the point? I don’t want to become Citizen Kane. It is frustrating and it’s an underlying theme running through this band, all of us, but it’s what drives us. So, it does serve as a positive purpose; it compels us to constantly push ourselves beyond our comfort zones, into new spaces and just reach a little further in time.”

You can read the rest of the interview with Lynch at I’m Music Magazine.

Lynch Mob‘s ‘The Making of The Brotherhood’ video: