Big news in the American Bombshell camp. Less than three weeks after releasing their sophomore album Tattooed ‘N Bruised via the EMP Label Group on March 29, 2019, American Bombshell have parted ways with their guitarist Steve Boyles. 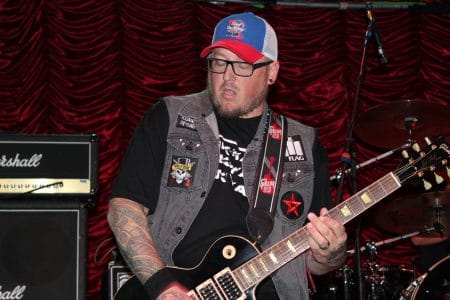 “Before you hear it from anyone else I am no longer in American Bombshell! I wish the guys the best! Thanks to all of the fans that made the last 5 years possible (You are family to me) I seriously love you all!”

American Bombshell posted a message on their Facebook page less than an hour later stating:

“As some of you may have seen on his post, Steve has elected to leave the band. We are currently working out the logistics to cover our upcoming shows, but wanted to let you all know there will be no cancellations. Expect more information forthcoming on how we’ll be proceeding, and we thank you for your continued support! #NoRegrets”

Boyles gave a small hint on what might have been the issue by later commenting: “… more of the same lol I’m a Rock N Roll guy! Probably more Punk Rock sounding”.

American Bombshell‘s debut album No Regrets finished at #6 on the Sleaze Roxx’s Top Ten Albums of 2016.

Sleaze Roxx stated the following in its review of Tattooed ‘N Bruised: “Whilst I thoroughly enjoyed this album, it isn’t breaking any new ground and the riffs and chord progressions have all been heard before in some manner. That’s okay though, as fans will still lap it up and it will feel comfortably familiar. I must say that the lead guitar work for the solos, melodies and fills is a standout and really elevates the rating of the album. However, the real shining light on Tattooed ‘N Bruised is undoubtedly vocalist Jay Cee. What a voice. He seems to have the ability to change his vocal style making each song sound like it is being sung by a different singer, yet being able to retain a portion of his own identity. His transition from calm soothing vocals to angst filled aggression is handled well and with relative ease. Rock is definitely not dead!”