Rumours are rampant that Guns N’ Roses singer Axl Rose will be joining AC/DC as the replacement for Brian Johnson in terms of the group’s ten canceled North American tour dates. 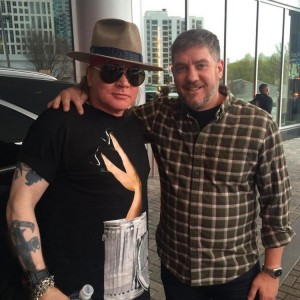 Alternative Nation has posted the following (excerpts) in an article today:

Atlanta Radio 100.5 DJ Jason Bailey reported yesterday on his show, as transcribed by Alternative Nation, that a ‘very very good source’ is telling him that Axl Rose will indeed be joining AC/DC to front the band for the remainder of their tour. Alternative Nation first reported rumors of Rose touring with AC/DC on Monday.

“This is what I’m being told, Axl was meeting with the AC/DC group, because it’s all but a done deal that Axl will front AC/DC for the 10 remaining shows. All 10, including Atlanta.”

“From what I was told, this was all kind of new inside information to me, Angus is a very black and white guy. He’s like, Brian, for health reasons, can’t continue fronting the band. He was supposed to retire after the last tour, so they wanted to continue going out on the road and continue making music, so if you can’t do it, we appreciate your services, but the show must go on. They’re in town, they were auditioning people for the job, and then they flew Axl in, again, this is from my source.” 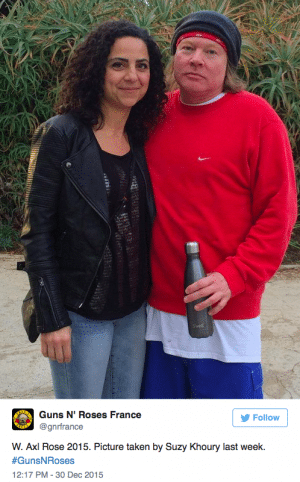 You can read the full article at Alternative Nation.

Rose was spotted last weekend in Atlanta by a fan going by the name of Mark Guglielmo who apparently got a photo (see above) taken with the enigmatic singer who looked in good shape compared to a prior photo allegedly taken in late December 2015 (see photo to the left).

While many reports state that Rose joining AC/DC for ten North American tour dates is a done deal, there are many factors which suggest otherwise.

Guns N’ Roses are scheduled to make their “reunion” comeback on April 8, 2016 at the T-Mobile Arena in Las Vegas, Nevada, USA. Although the “reunited” Guns N’ Roses only have a handful of dates confirmed, a large number of unconfirmed festival and other tour dates has recently surfaced suggesting that GNR will be busy in 2016 and that Rose may only have the month of September in 2016 left wide open.

Moreover, Rose allegedly indicated to Guglielmo in Atlanta last weekend that Guns N’ Roses were planning on doing a full tour after the announced festival dates.

Finally, while there is no question that Rose is an excellent and unique singer, one has to wonder how he would fare singing the AC/DC songs with the grittier vocals.