After Hungryheart‘s two first albums, Hungryheart and One Ticket To Paradise, made the Italy based group a very popular and respected band within the AOR / melodic rock world, the band has released its third album Dirty Italian Job on June 29, 2015 via Tanzan Music. Hungryheart‘s third studio record consist of twelve songs of pure melodic hard rock characterized by the unmistakable sound of the group. 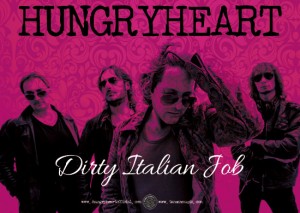 Throughout the last five years, the band and each of its members have had the opportunity to share the stage, play and collaborate with names such as House of Lords, Mitch Malloy, Bobby Kymball, Vinny Appice, Issa, Kelly Keeling and many others.

Percudani recently stated: “The last five years have been intense, since One Ticket To Paradise. There have been numerous collaborations and live shows over these five years. This is a long awaited album, especially for us, and a great deal of hard work has gone into the making especially over the last year.” He added “We believe it to be a ‘unique’ album. I personally believe that this is one of the most profound albums that I’ve ever done, starting from the songwriting leading to the actual songs, the lyrics, which as always are very positive.” Zighetti recently commented that: “This year’s big news is our new bass player, Stefano “Skool” Scola, who has brought great talent to the band.” Botteshi added: “I like to think that this album is an evolution from One Ticket To Paradise as I believe that Hungryheart has evolved as a band over the years, as individuals and in creativity.”