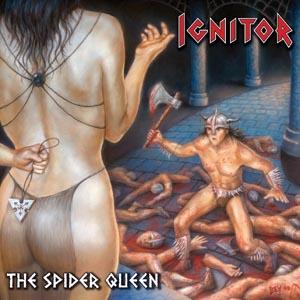 Amongst its ranks IGNITOR features veteran musicians of the US metal scene including founding guitarist Stuart Laurence (Batlord) from AGONY COLUMN and the recent addition of legendary frontman Jason McMaster of DANGEROUS TOYS and WATCHTOWER fame. The Spider Queen is an original rock opera written by guitarist Stuart Laurence featuring nine scenes plus an intro and an epilogue, each scene represented by a song. The album narrates the adventure of a young man facing the quest of his life, avenging his parents’ death. The story revolves around a mysterious talisman and the magic it possesses, with many turns of events that lead to an unexpected end. Each and every one of the numerous characters are impersonated by the versatile, dramatic and impressive vocals of Jason McMaster.

Bolstered by the strength of their new line-up and at an all time creative peak, IGNITOR find themselves an even more formidable force than ever before. True heavy metal is their game and The Spider Queen, a concept album of pure epic metal, will not disappoint.

To preview The Spider Queen go to http://www.heavyartillery.us