As the fearless Sleaze Roxx editor Olivier noted in his review of this concert, he was originally supposed to conduct an interview with Striker prior to kicking off their tour with Steel Panther. Unfortunately, the dreaded “day job” got in the way, and he asked me to step in at the last minute.

Now, I didn’t have Olivier’s depth of knowledge about Striker and frankly this was my first ever “stand-up” or live interview.  I was a bit nervous, but Chris Segger and Tim Brown turned out to be great guys and easy to talk to.  I figured they would want to get this over with and go have dinner or something, so when I asked how much time they had and got the response, “How much time do you need?”, I knew these guys were cool. 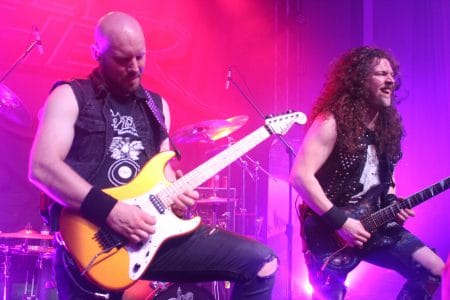 Given the circumstances — last minute nervous cramming for an unexpected solo interview — I didn’t get into specifics about the band or its history. Sleaze Roxx may have another opportunity to catch up with Striker later this year for round two.

Sleaze Roxx: Nice to meet you guys!  Thanks for taking some time to do this interview.  So first of all, how’s it going?

Sleaze Roxx: Yeah, I heard the soundcheck from the road. It’s pretty damn good. Sounds awesome. I don’t know how much time have you guys got?

Tim Brown: How much time do you need?

Sleaze Roxx: Let’s start off with an easy question. Steel Panther. It’s got to be pretty good for you guys?

Sleaze Roxx: I think you’re doing eight dates with them? 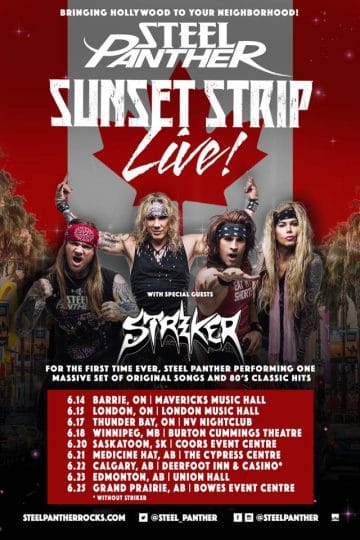 Sleaze Roxx: And your hometown is Edmonton. Edmonton will be the second last show.

Chris Segger: Hometown Edmonton! You bet. We’re really excited for that one.

Sleaze Roxx: Do you get back there to play a lot? I mean, you live there.

Chris Segger: Yeah, we try to play no more than once or twice a year but it’s quite a bit compared to some other places we might play.

Sleaze Roxx: So after you finish Steel Panther, you get a rest for like a week and then you’re out on the road with Holy Grail and Bewitcher for about a month and a half.

Chris Segger: Yeah, yeah. Straight into a couple of months. We’ve got three tours in just over a month. Yeah, sounds about right. That sounds busy!

Tim Brown: I think it’s like 22 shows with Holy Grail. And then we’re doing about almost 20 headlining shows ourselves. Just getting around North America.

Sleaze Roxx: And how is that working? Is it generating more interest in the band?

Tim Brown: I would say every tour is kind of bigger and better. I mean, Steel Panther. Wooh [all laugh]!

Sleaze Roxx: Do your audiences get to know your songs through the tour? And they pick up the albums?

Tim Brown: Absolutely. Yeah. They mostly… we get them singing by the end of a set. They know the words [laughs].

Sleaze Roxx: With Steel Panther, is there any concern there, because you guys have a bit of musical style differences?

Chris Segger: Well, yes, and no. I think one thing like we’re a little bit of a… I don’t even know what a good word is… a bit of a chameleon sort of a metal band. We just did a tour in the states with Death Angel who are Bay Area thrash guys. And we were able to put together a set of the fast speedy Striker songs where tonight, the set’s going to be much more focused on kind of the rock songs, and we’ve got a lot of those too.

We’ve always kind of joked around about writing an album and calling it ‘Identity Crisis’ and just having you know, a rockin’ kind of harmony, vocal, speed metal fun-time stuff, and then have another, you know, sort of heavier side because we do have a lot of songs in both styles. 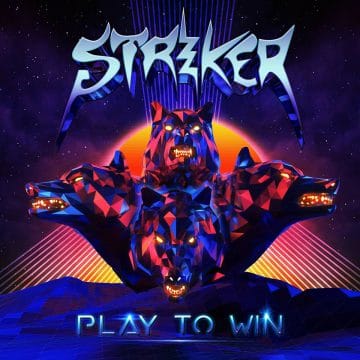 Sleaze Roxx: I think that crosses out one question [all laugh] because I listened to some of your earlier albums. And then this new one ‘Play To Win‘ is really kind of different. Like you say, it’s got the harmonies both in the  the vocals and the guitars that are a little bit different from kind of your past Iron Maiden based or Judas Priest based stuff.

Chris Segger: Yeah, I could see that for sure.

Sleaze Roxx: So is this an intentional change of direction, or has it just kind of developed over time?

Tim Brown: We’ve written a lot of albums. So I mean, ‘Play To Win’ is our sixth album. So we’ve already done a lot of, you know, speed metal, Iron Maiden power, metal kind of stuff. Man, I mean, you can only sort of write the same style of song so many times before you want to try new things. So we’re just like, you know, we’ve got a lot of stuff. Let’s try something new. So you know, a little less Iron Maiden. A little more Whitesnake, maybe something like that.

Sleaze Roxx: And you’re liking it?

Chris Segger: Yeah, I think each album is sort of, you know, whether it’s a direction we continue with on the next album or something, we’ll decide. What we want it to really focus on is a little bit more rockin’ on this album.

See Striker Live this summer on the “Summer of Shred”. More dates to be announced!

Striker‘s “Fight For Your Life” (from Armed To Your Teeth album):

Sleaze Roxx: Well it’s working. It’s a good album. But I wanted to congratulate you on your last album, and the Juno nomination.

Sleaze Roxx: How did that affect the band at all?

Tim Brown: We had massive hangovers!

Sleaze Roxx: In terms of your musical style, you didn’t intentionally change anything like we talked about? 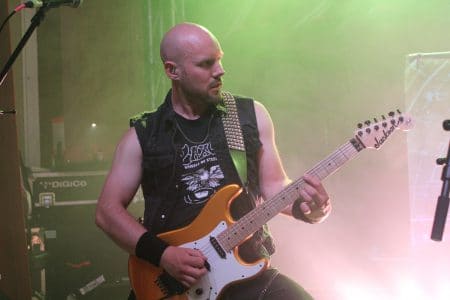 Chris Segger: No, it didn’t change anything musical. It’s a very nice accolade. Like, I think it’s something that, you know, people know what the Junos are in Canada. So yeah, to get that nomination is a really great honor and talking to anybody and they go “Oh, a Juno nomination”, there’s sort of a… they’ll take you a little bit more serious way than “I play in a metal band.” Like we’re playing at the bar on the corner tonight. Right [laughs]? It’s sort of, people don’t necessarily know [the difference] if they’ve never heard you. And when you can add that sort of [thing] behind your name, I think it adds a little clout.

Sleaze Roxx: And you’ve got a lot of West Coast nominations and awards as well. Particularly in Alberta, I think, isn’t it?

Tim Brown: We’ve won three Western Canadian Music Awards in a row, and we’re up again this year. This year, we’re actually up for three. And we’re, we have one for Edmonton Music Awards. We’re up again, this year for our fifth in a row. And usually every year at the Edmonton Music Awards, we’re up for like, anywhere between two and five awards. We only win the metal one because we’re not you know, metal bands aren’t allowed to win the like ‘Album of The Year.’ Whatever [all laugh]!

Sleaze Roxx: Sad but true. So obviously you’re popular in the [Canadian] west. Do you see any difference when you come east? 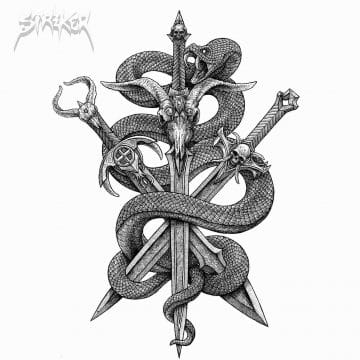 SR: I talked to a couple other bands from the west and when they come east, they say, “Well, they’ve never heard of us out here.” That kind of thing.

Chris Segger: I think we put a lot of work in in the early days. Like this is our first sort of cross Canada tour in probably five years. Not that we haven’t played Canadian shows on both coasts and that, but early on in the band, we did a lot of leg work, touring Canada, so we sort of got a good fan base going right across from Victoria to Halifax that has thankfully lasted and continues to grow.

Sleaze Roxx: That’s got to be a blast just getting in a bus and touring the country, east and west?

Sleaze Roxx: Who controls the radio?

Tim Brown: We sort of all do…

Chris Segger: [Interrupts] Yeah, we sort of all do… but I would say [lead vocalist] Dan [Cleary] hogs it the most and he’s the only one who’s phone is connected to the Bluetooth.

Sleaze Roxx: What’s on there? What’s the most popular album or band you guys listen to? 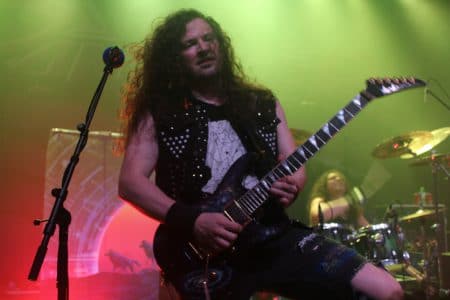 Chris Segger: [Laughs and rolls his eyes] Oh man. It’s such a big mix of everything. Yeah, it’s all over the place like from Huey Lewis to…

Chris Segger: Whatever heavy shit Dan listens to!  Whatever the mood hits.

Sleaze Roxx: Well guys, we covered a lot here.  Is there anything you guys want to talk about? Anything you want Sleaze Roxx readers to know about Striker?

Tim Brown: Well, we’re on tour with Steel Panther. And then we’ll be on tour again across North America in July and August. So hopefully they check that out.

Chris Segger: We will be coming to Toronto and Montreal on one of those tours. So we back into the last couple of dates at the end of July I think, with Holy Grail.

Sleaze Roxx: Guys, thank you very much. Good luck with the tour.

Thanks to Jon Asher of Asher Media Relations for setting up the interview and arranging concert access and swag!

Fresh video for Former Glory – the single from Striker’s 5th studio album and 2nd major independent release Don’t forget to add us on Spotify and Apple Music to listen to our entire discography! See Striker Live this summer on the “Summer of Shred”. More dates to be announced!

See Striker Live this summer on the “Summer of Shred”. More dates to be announced!