I first spoke with Rough Cutt guitarist Chris Hager in August ’18 for Sleaze Roxx. At the time, Hager, drummer Dave Alford, singer Paul Shortino, former Quiet Riot guitarist Carlos Cavazo (who had recently left Ratt) and bassist Sean McNabb (Quiet Riot, Great White, Lynch Mob) formed Rough Riot, which was a play on their collective musical history as members of Rough Cutt and Quiet Riot. At the time Hager said, “There’s some stuff we’re working for the fall of 2018. I can’t say what it is as of yet but you’ll be among the first to know.” While, that material didn’t see the light of day, by all appearances the band was planning to move forward. Rough Riot recently shared photos of a songwriting session, featuring Paul Shortino and Carlos Cavazo, but there was no Chris Hager to be found. Hager however had announced he was working with Dave and former Sarge vocalist Steven St. James. He then revealed that he and Alford were forging ahead with Rough Cutt with St. James fronting the band and added bassist Jeff Buehner. There will another guitarist who has yet to be announced. 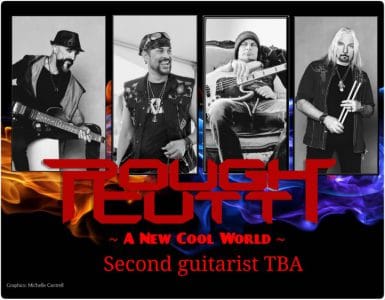 Sleaze Roxx: So Rough Cutt is alive and well.

Chris Hager: Yeah, I had been working on some stuff with Steven (St. James) while also doing the Rough Riot thing. I thought it was incredible stuff. I spoke to Dave and we decided that we should do this as Rough Cutt.

Steven St. James: So, Chris and I go way back to Sarge, as you know. That was a great band. I was playing in Sarge but then got the call which landed me signing with Motown Records. We were all starving musicians and I felt that was a great opportunity. In the end, that didn’t pan out, but some things are just not meant to be. I love working with Chris. I feel terrible for leaving Sarge at a very critical point. When Chris and I started to work together again, I had to address the 800 pound gorilla in the room! I got out of the music business in ’85-’86 when the Motown thing didn’t work out. My wife had been encouraging me. She’d say stuff like, “Hey, you’re not done. Get back out there!” So, while other guys my age have spouses that are saying, “Oh, yeah, that band thing?” My wife has been very supportive. Let me say, that she didn’t mean, “Get signed and tour.” She meant “Just get out there and just have fun.” Here I am all these years later with Chris having come full-circle.

Dave Alford: So we tried doing things the old singer’s way [Paul Shortino’s way] and that just didn’t work out. I think this time around, we have the band’s fifth line-up, but I have to say that I feel this is the most solid line-up we’ve had. We’re doing different things on the new songs. We’re experimenting. It will be different but it’s still Rough Cutt. I don’t have to tell you, but as you know, the first record was completely different from the second record. Our third, which we are currently working on, will be different from the previous two records. Bringing in Steven St. James to take over for Paul [Shortino] has been a huge plus, because we’re already gelling vocally. We’re still looking for a second guitarist, because as you know, Rough Cutt has always been known for having a very strong guitar core.

One of the best hair metal songs ever! Rough Cutt classic! I don’t own the copyright to this song or any other songs posted on the Hair Metal Network. This is for promotional use only. http://www.amazon.com/Wants-You-Rough-Cutt/dp/B002HLMY90/ref=sr_1_7?ie=UTF8&s=music&qid=1277894311&sr=1-7

Sleaze Roxx: I like being a voyeur on social media and watching what is happening with bands. You guys posted some updates on Facebook without being too specific. ‘New Cool World’ was the name of the page. I was excited. I posted something like “I’m excited to hear this, but I hope this isn’t the name of the band!” Steven you posted a reply… 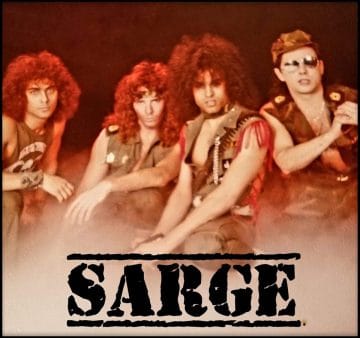 Steven St. James: I remember that! I posted “No, that’s not the name of the band!”

Sleaze Roxx: I was also watching the Rough Riot page.

Dave Alford: I didn’t want to let it go [Rough Cutt]. We had been writing some songs with Paul. Chris had been doing some stuff with Steven. When things didn’t gel with Paul, I called Chris and Steven and let them know I wanted to do Rough Cutt. Hell, I started the band in the early ’80s! Chris and I are the only remaining original members and with a great singer like Steven, I think we can do this. So I asked Steven if he wanted to be a part of this and he immediately said “Yes” so from there forward, we have moved forward with the ‘Rough Cutt lineage.’ Ruben, there was no reason to dissolve such a good thing, as far as I’m concerned. Listen, we survived some huge curveballs. We had Jake [E. Lee]. He went to Ozzy. People asked, “What are you gonna do now?” So, then we got [Craig] Goldy. Then he left us. Then we got Amir [Derakh] and you know the rest! Listen, as long as I can still play and as long as Chris can still play, age doesn’t matter! We just want to keep rockin’ and as soon as we find the right guitar player — and make no mistake, we will find the right guitar player — it’s going to be magic!

Steven St. James: The songs that we have, we have a few. We have been looking at what we have and we’re all of the same thought that we want to make sure these are the right songs. We have to be very selective. We have to have strict quality control for Rough Cutt. We want to get to a point where we have enough songs that represent what we’re all about. We’re strong vocally and musically. I think the pieces are falling into place nicely. Like Dave was saying, the next thing is getting a second guitarist. We’ve had a few guys over and they’ve been great, but like with the songs, we have to have quality control. We’ve asked ourselves the same question, “Is this what represents us now and going forward?” So, we’re still looking.

Chris Hager: Here’s the thing Ruben, if it’s not a great song and it doesn’t have a great hook, we’re not doing it. At this point in our career, if it’s not the best that it can be, then what’s the point? We’re not kids anymore. We want to release music that is worth people’s time to come see live, to listen to, to download, stream or purchase physically. Like Steven said, we’re approaching the players with that same level of scrutiny.

Dave Alford: They’ve got to fit!

Chris Hager: Right, time is of the essence. It’s really important to us that we get everything right. We want people to say, “Wow! I wasn’t expecting this!”

Steven St. James: Make no mistake, I know I have huge shoes to fill, because fans know Paul as the voice in all the classic songs. I’m a fan myself! I’m up to the task of doing the best possible job in Rough Cutt. I have to step up my game!

Sleaze Roxx: What’s the relationship with the guys in Rough Riot?

Chris Hager: Things turned out how they did. Things didn’t work out, but we don’t have any animosity toward them or them to us. That includes the other Rough Cutt guys Amir [Derakh] and Matt [Thorne]. I’m thrilled to say that it’s all good among all camps. I think this is a plus for the fans because they’ll have Rough Cutt music and they’ll have music from Rough Riot.

Sleaze Roxx: I’m happy there was not mudslinging. You guys did this so under the radar considering how quickly things deteriorate with social media.

Dave Alford: Ruben, we did that intentionally, I will tell you why. Like Chris said, there was no animosity. There’s no negativity. We’re all still friends. I’ve got Steven St. James and he’s my ‘secret weapon.’ I’m bringing Rough Cutt back and I have a great singer that is going to sing new music that is going to live up to the Rough Cutt name. I can’t wait to unleash this on the world, but first we have to find our second guitarist. Thank you for your support! Just so you know, this is the first time we’ve spoken to anyone about the new Rough Cutt line-up.

Sleaze Roxx: Last thing, you have Jeff Buehner, who I’m familiar with because he played in various bands in and around the Portland, Oregon area. In fact, the guy grew up about 5 miles from where I’m at speaking to you. How did you find him and what does he bring to Rough Cutt?

Chris Hager: We should mention Jeff! Thanks for asking. What a small world, huh?

Dave Alford: We have some friends that live in Portland/Seattle area, Jeff used to to something with a friend of ours, Jeff Warner who used to play in Black ‘N Blue. We were looking for guitarists to audition as you know, but Jeff’s name came up through a mutual friend, we were asked to look at him. Chris and I knew after the first audition that Jeff really did his homework. The only criticism I had for the boy was to pay attention to ‘the little things.’ He already had the arrangements down, the feel, he’s a solid bass player. Jeff sounds like he has been playing with us all along. You’ve seen him! You know he can play and he can sing too!