Shortly after L.A. Guns‘ (featuring drummer Steve Riley and bassist Kelly Nickels) historic set at the M3 Rock Festival in Columbia, Maryland, USA on May 4, 2019, Nickels was interviewed by Rock N Roll Experience. This was the first time that a L.A. Guns line-up performed without singer Phil Lewis or guitarist Tracii Guns in the line-up. 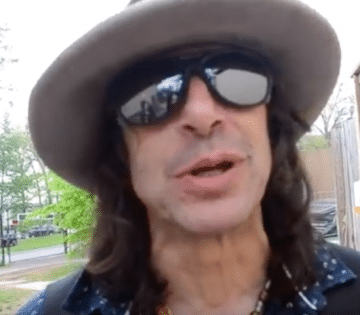 On whether the M3 Rock Festival gig was a one off show, Nickels advised (as transcribed by Sleaze Roxx): “This was always a one off. So it’s gonna serve to perhaps get us some other gigs if we want to do something else. So we’ll have to see what happens for the future. We really can’t say. We’d like to. We’d like to keep it going. Like to do a record with these guys [Riley, guitarist Scott Griffin and lead vocalist Kurt Frohlich] you know. Do a record written for Kurt‘s voice, his style. It would be interesting to you know see. So yeah, we just have to hang on man. I just finished 20 minutes ago so I don’t know [laughs].”

In terms of Lewis and Guns trashing Nickels and Riley‘s version of L.A. Guns in the media, Nickels stated: “Ummm. You know it’s a free country to say what you like. Ummm. I am all about love and believe that life is precious and I am not going to waste it on negativity.”

On whether he would ever perform with Lewis and Guns again, Nickels opined: “I would never say never to anything. You know, it’s probably a far-fetched dream or reality that it would ever again because not so much with me but I think that there has been a long time with other people and stuff, they might not be as forgiving as I am. So I don’t know if it will ever be possible. It’s really a shame because we used to really never have any problems. I never had problems with Phil, ever. Ever. So it really came out of left field. You know, they can say what they want. Like I said, it’s a free country man if it’s a route that you want to go.”