Krokus to embark on ‘Adios Amigos World Tour’ with final show in Zurich, Switzerland on Dec. 7, 2019

After 18 studio albums, eight compilation albums and two live albums (as per Wikipedia) over a 40 plus year career, Krokus will be embarking on a farewell tour before calling it a day with a final show at the Hallenstadion in Zurich, Switzerland on December 7, 2019. 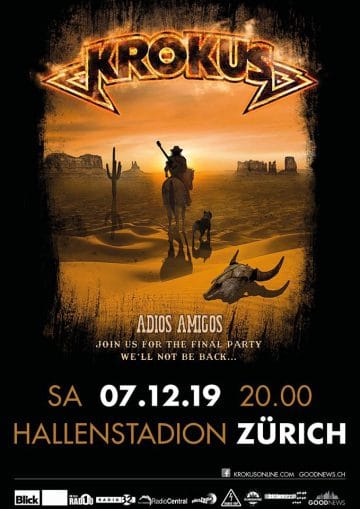 The following message was posted in part on Krokus‘ Facebook page earlier today:

“Krokus shows have always been special and should stay that way. That’s why we decided to stop when it’s still really good. That’s how the fans should remember us. Unlike other bands that are on their eternal “farewell tour”, we will keep our word and pull the plug at the end of 2019, handing over the ‘Rock Magic Wand’ to the youngsters.

Marc Storace: “We look forward to a grandiose 2019 Adios Amigos World Tour with the final highlight in Switzerland.”

Fernando von Arb: “We have signed reciprocally contracts with each other that it really is over. We will stick to that. Every party has to end eventually.”

Chris von Rohr: “It was an unparalleled journey with all the ups and downs rock life has to offer. Now we are looking forward to the final lap of honor and will give it our all once more. We owe that to ourselves and our fans. The 7th of December, 2019 will be unforgettable as it was on the 27th of March 1982. “

The legendary English journalist Malcom Dome (Kerrang Magazine) justifiably says: “Considering the long-term work of this band, Krokus are clearly one of the best hard rock bands of the last 40 years.”

Krokus will be looking forward to prove this again in 2019.”

Krokus – Midnite Maniac (1984) music video from the album “The Blitz”.