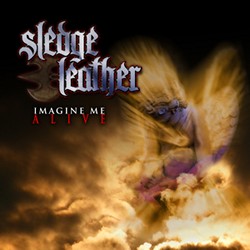 The Sledge Leather debut album ‘Imagine Me Alive’ was inspired in 2010 when Leather Leone called Sandy Sledge to collaborate on the Ronnie James Dio track “Egypt” for a demo tribute recording. Due to the overwhelming response for morematerial, Sledge Leather was born and were confirmed for Germany’s Keep It True Festival on April 30, 2011.

Sledge Leather entered the studio in 2011 to record their comeback album ‘Imagine Me Alive’, engulfing the listener in an onslaught of heavy metal with 11 cohesive tracks that resurrects a classic heavy metal sound with Dio’s former band members Scott Warren (keyboards), and Jimmy Bain (bass).

“We wanted to finish what we started with Rude Girl in the ’80s – straight up heavy a** metal,” Sandy Sledge explains, “This album truly shows the different ways that Leather’s voice can create music.”

Respected industry friends Mike Varney and Monte Connor comment on Sledge Leather. “Sledge and Leather are the most powerful team of female rockers on the metal scene today,” says Mike Varney, founder of Shrapnel Records. “Leather sounds as great as she ever did and kicks even more ass than she did in the ’80s!,” says Monte Connor of Roadrunner Records.

‘Imagine Me Alive’ is currently available from the band via www.sledgeleather.com and soon through all on-line outlets.