Canadian Maritimer rockers Lionsault have released their new song “In The Wild” which serves as the official goal song for the hockey team Moncton Wildcats who play in the Quebec Major Junior Hockey League. 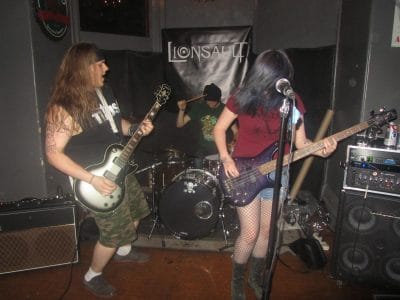 Lionsault‘s track “In The Wild” is featured in The East Mag, which states in part:

“It was recently announced that the Moncton Wildcats would be getting a new goal song courtesy of Miramichi rockers Lionsault. It debuted to a pre-game audience of 6000 people, but if you weren’t actually in the crowd here’s your first chance to give it listen.

Titled ‘In The Wild’, it’s frankly a brutal and unsportsmanly intimidation song that details not only what the Moncton Wildcats think of their opponents, but moreover what they plan to do with them. It seems the team have no qualms about taking their rivalry well outside the confines of the rink. The song is rife with threats suggesting that their opponents keep their doors locked, lest the Wildcats come a’knocking.

The song was created as a part of a contest issued as a joint venture between the team and Music/Musique NB, open to members of the organization. The song in its full version is over four and a half minutes long, but gets trimmed down to a just forty second so as you don’t get tired of hearing it every time the Wildcats score a goal.”

You can read the rest of the article at The East Mag.

Lionsault‘s “In The Wild” song:

Lionsault – In the Wild

Lionsault’s brand new single ‘In the Wild’, the new goal theme and written specially for the QMJHL team, the Moncton Wildcats.Available on iTunes now: https:…