Former Sister Sin lead vocalist Liv Sin has released a second song entitled “Killing Ourselves To Live” featuring Destruction‘s Schmier for streaming from her upcoming debut solo album Follow Me, which will be released via Despotz Records on April 28, 2017. 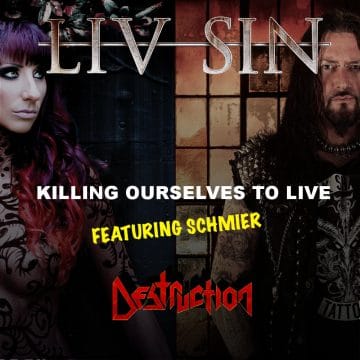 “Despite great success, the band Sister Sin parted ways in late 2015 after a 13 year career. Now their former singer and the driving force within the band band, LIV SIN, rises from the ashes with a new band and a whole new album. The second single from LIV SIN, “Killing Ourselves to Live”, is released today. This time, Liv has joined forces with the singer and mainman from Destruction, Schmier…

Liv says, “The lyrics came to me during a period when I was very disappointed with the human race and I felt like there was no humanity left, just egos, and that we are trying too hard to destroy ourselves, without even actually thinking twice about what we are doing. I felt that I needed a cool, more aggressive voice for this song and my manager suggested to me to talk to Schmier to see if he wanted to scream for me, and he liked the idea. So I’m sending out a big ‘thank you’ to Schmier and Destruction for being a part of my journey! “

Schmier adds, “After the sorrowful break up of Sister Sin, it was very cool to hear that Liv would continue with a solo career. When I was invited to join her on one song, I was thrilled! ‘KIlling Ourselves to Live’ is more metal than her former band, comes with a very catchy melody and Liv’s distinguishing vocals. Her fans will love this I’m sure!”

LIV SIN‘s upcoming album Follow Me will be released via Despotz Records April 28th 2017 and is co-produced by longtime Accept and U.D.O. member Stefan Kaufmann and U.D.O. bassist Fitty Wienhold.”

ROCK/HARD ROCK/METAL Liv Sin feat. Schmier (Destruction) – Killing Ourselves to Live The second single from Liv Sin’s debut album “Follow Me” that will be released april 28 2017. Pre order the upcoming album: http://despotz.bigcartel.com/artist/liv-sin The singer and major force from the former band Sister Sin rises from the ashes with a new band and a whole new album that will be released in early 2017.