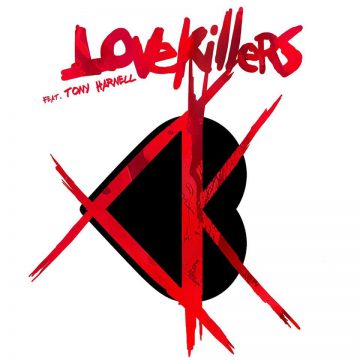 “Do you remember when albums like TNT’s “Intuition” and “Tell No Tales” were regularly played on your stereo? The Norwegian band worked themselves into a musical niche presenting the virtuoso guitar approach from Ronni LeTekro and the soaring vocals of the US singer Tony Harnell as trademarks of a unique Melodic Hard Rock sound. There is no denying that since the early 90’s, the story of TNT has gone into a rollercoaster of highs and downs and the recent end of the relationship between Harnell and LeTekro in TNT, unfortunately seems to have put an end to their collaboration and to the band’s timeless signature sound.

Lovekillers however marks Tony Harnell’s return to the soaring vocals and Melodic Hard Rock sound of the 80’s TNT albums. It is an over-the-top and straight ahead way to embrace the classic 80’s sound and bring it back with passion and the amazing vocal register that only Harnell can deliver.

The resulting album Lovekillers is a glossy, polished record with a hint of the regal. Written by Harnell together with Alessandro Del Vecchio together with other skilled writers like Nigel Bailey, Pete Alpenborg, Marco Sivo, Jonas Hornqvist and produced by Del Vecchio, melodic rock won’t get any better than this!”