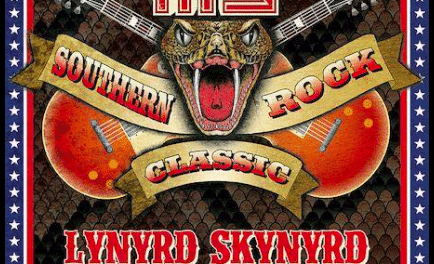 The M3 Rock Festival is in its ninth year and the Merriweather venue where it has previously been held has announced the line-up for the 2017 edition to be held on Friday, April 28, 2017 and Saturday, April 29, 2017. Interestingly, the “M3” brand has added a third day dubbed M3 Southern Rock Classic which will be headlined by Lynyrd Skynyrd who is best known for their hit song “Sweet Home Alabama.” 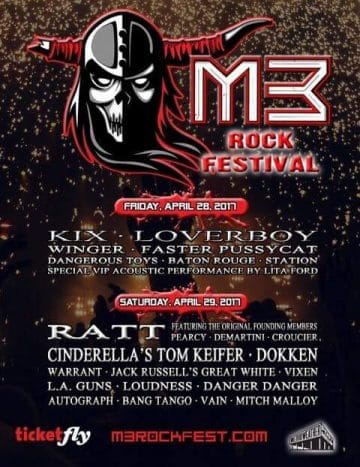 The Merriweather Music website states the following about the M3 Rock Festival: “Now in its ninth year, M3 Rock Festival has grown from an up-and-comer to the definitive way to party like it’s 1989. Starting with the annual Kix-Off Party on Friday and heading straight into the festival on Saturday, M3 features enough hard rock and hair metal bands to make your head spin (although, let’s be honest… that’s probably from the two cans of hairspray you used). Both stages are coordinated so that no sets overlap with each other, meaning you can jam-pack your entire day with the maximum amount of metal. We recommend that you start doing tons of arm curls, ’80s movie montage-style, because this May at Merriweather you’ll be throwing up more horns than you can possibly imagine.”

With respect to the M3 Rock Festival headliner Ratt (featuring singer Stephen Pearcy, guitarist Warren DeMartini and bassist Juan Croucier), the Merriweather Music website states in part: “Ratt‘s brash, melodic heavy metal made the Los Angeles quintet one of the most popular rock acts of the mid-’80s. The group had its origins in the ’70s group Mickey Ratt, which had evolved into Ratt by 1983; at that time the band featured vocalist Stephen Pearcy, guitarist Robbin Crosby, guitarist Warren DeMartini, bassist Juan Croucier, and drummer Bobby Blotzer. The band released its self-titled first album independently in 1983, which led to a major label contract with Atlantic Records. Their first album under this deal, 1984’s Out of the Cellar, was a major success, reaching the American Top Ten and selling over three million copies. “Round and Round,” the first single drawn from the album, hit number 12, proving the band had pop crossover potential. While their second album, 1985’s Invasion of Your Privacy, didn’t match the multi-platinum figures of Out of the Cellar, it also reached the Top Ten and sold over a million copies. By that time, the band could sell out concerts across the country and was a staple on MTV and AOR radio. Both Dancin’ Undercover (1986) and Reach for the Sky (1988) continued Ratt‘s platinum streak and their audience, had only slipped slightly by the time of their final album, 1990’s Detonator.”

Of note, the Merriweather Music website is silent on the developments of recent years with Bobby Blotzer using the Ratt name despite the opposition from the remaining classic line-up Ratt members. 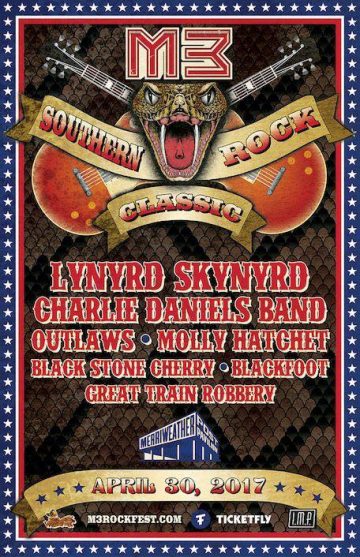 And so Skynyrd stands, “still unbroken.” “People may say, ‘they need the money,’ well I don’t think any of us need the money,” Van Zant says. “It’s just that we love the music, it’s bigger than the money, it’s not even about that any more. We have to make a living, sure, but it’s about the legacy of Lynyrd Skynyrd, and what it stands for, what the fans are all about. There’s nothing like getting out there playing a great show with Skynyrd and seeing people love this music.”

Adds Rossington, “We’re still standing, still keeping the music going. We wanted to do the guys who aren’t with us any more proud, and keep the name proud, too.”

With a catalog of over 60 albums, sales beyond 30 million worldwide and their beloved classic American rock anthem “Sweet Home Alabama” having over two million downloaded ringtones, Rock & Roll Hall of Famers Lynyrd Skynyrd remains a cultural icon that appeals to all generations.”