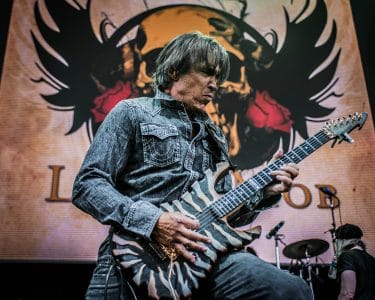 includes long-time bandmates Jeff Pilson (bassist) and “Wild” Mick Brown (drums) along with on and off Lynch Mob and current Warrant lead vocalist Robert Mason. The new band, which used to be called Super Stroke, is apparently called The End.

Lynch stated as follows in his interview (as provided by Blabbermouth with slight edits):

“I do a lot of records where they’re just sort of seat-of-the-pants, which is nothing wrong with that, like KXM and Ultraphonix, [which are] written real quick — we just get in a room and bang it out and just go with our first instincts, and we don’t really labor over it. The End record is really the opposite of that.”

“Jeff and I spent a lot of time crafting the songs, as we did in the Dokken days… I think there’s quite a bit of ’70s art rock going on in some of these songs, which is pretty cool. It’s got the usual groove, heavy rock thing, melodic rock thing, it’s got all that — but it’s also got that ’70s, ELO, Elton John [vibe] — just really interesting, intelligent, classic changes. It’s a very satisfying record to listen to — it’s pretty deep, and I think people will really dig it. It doesn’t sound like Dokken; it doesn’t sound like LP [Lynch/Pilson]; it doesn’t sound like Lynch Mob. It has elements of all that, obviously. I think it’s a natural evolution of the LP record that closely it resembles in my mind. It’s me and Jeff sitting at his studio working it out, so what you’re going to get is really that, with Robert Mason on top of it.”

You can read the rest of the article at Blabbermouth and listen below to the interview with Lynch by Idaho’s 94.9 & 104.5 The Rock radio station:

Shaggy is joined by special guest Mike Gaube of “Mike Gaube’s Headbangers” to interview the great George Lynch of Lynch Mob and Dokken! Listen as they discuss the cancelation of the Idaho Rockfest, conspiracy theories, Goerge’s upcoming projects, and Mike and George’s sensual hugs.