After Sleaze Roxx first unveiled the existence of the new “supergroup” ZFM last week, the group’s band members have revealed their identities in an interview with Canadian journalist Mitch Lafon on his podcast One On One With Mitch Lafon, which posted the following message on Facebook (with slight edits) earlier this morning: 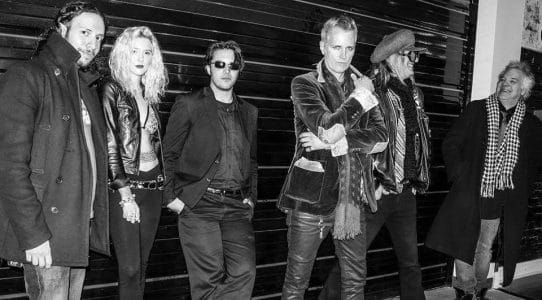 “One On One With Mitch Lafon is please to introduce:

“New Leaf” the debut video from the brand new hard rock group Zen From Mars (ZFM) can be seen below. The single will be available for purchase this Friday on iTunes/Amazon etc. through Thom Hazaert’s “THC Music”, a subsidiary of David Ellefson’s “EMP” label. The song was mixed by: Matt Wallace (Faith No More, Maroon 5) and mastered by: Maor Appelbaum (Faith no More)

Zen From Mars are an all new 6 piece hard rock band. It’s lineup consists of:

ZFM came together over a year ago and has been working on a full length record in secrecy up until now. Very few details are known about the project aside from the quotes by members of the band which can be read below:

Drew Fortier, the band’s guitarist, stated that: “Zen From Mars has been our secret baby for a long time now. I am so relieved and excited to finally start getting it out there. A lot of thought has gone into this band and the release structure for the record will surely be very unique. Keep your eyes and ears peeled. This is only the beginning.”

The band’s vocalist, Stephen Shareaux stated: “ZFM is purely a passion project, I just really love this music! We had a deep connection musically from the word go, Drew and I! Plus he was just so damn persistent! (laughs)”

Kate Catalina, the band’s keyboardist stated: “It has been a really thrilling process watching this band come to life and hearing musical concepts turned into beautiful, heavy, transcending songs. The contrast alone is mesmerizing: each member operates from a different genre, but we all met in the same land of songwriting and performance.”

The video, directed and shot by: The team of Joe Placzkowski & Frank Ritter and edited by: Drew Fortier, can be seen below.”