After a few rounds of voting, Norwegian rock outfit NiteRain have received the most votes to end up #1 in voting spot among 25 bands from around the world in order to secure a spot in the prestigious 2016 Sweden Rock Festival.

The band commented on their Facebook page: THANK YOU SWEDEN ROCK! We won amongst 280.000 votes!! Thank You! WE WON!! WE WON TOGETHER!! Because of you people, NiteRain is playing Sweden Rock Festival this summer!! We love you all so much, you did a hell of a job with the voting, and we cant thank you enough! WE DID IT TOGETHER!! MUCH LOVE FROM NITERAIN.” 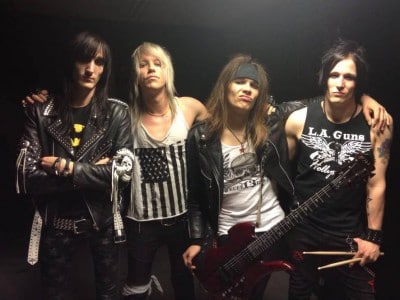 The final voting results were as follows:

NiteRain will be releasing their follow-up album to their debut Crossfire this May. Sleaze Roxx reviewed Crossfire and commented “Crossfire boasts a polished sound alongside clever lyrics and song structures that demand a place in the current hard rock scene. The album also showcases monster riffs, infectious hooks, and strong melodies delivered with the confidence of an experienced band. Crossfire is a well put together album fitting of loud parties, faster cars and boisterous times — give it a listen and savor the joys of trashy, unapologetically decadent fun. If you become addicted to Crossfire, then consider NiteRain to be your dealer.”