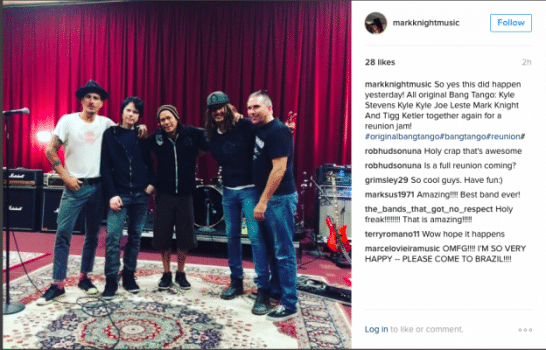 Back in January 2016, Sleaze Roxx conducted an interview with Knight who spoke about the possibility of an original Bang Tango line-up reunion. The following are excerpts from the interview.

Sleaze Roxx: In the Bang Tango documentary, it did not seem that a reunion with Joe was possible based on some of the comments that you were making in the movie. Have things changed a lot since the movie has been filmed or the footage that you put in for the movie compared to now?

Mark Knight: Well, you know what? I think I hit Joe up about a mutual friend that had passed away and i kind of reached out to Joe about him. We ended up — by the end of the conversation, we were talking about when we get onstage again and everything just sort of [got] washed under the mat. It all just went away, You know, we did do some great stuff together in the band and it’s like, “We are not getting any younger. Why not do something with it?” So I tried to do kind of a reunion this summer with all the original guys. It just did not pan out for personal reasons. Not me, but just the dynamics of bands. Couple of things went bad. Not between me and Joe, so I went down there and had a little reunion with him and got up onstage with him. You never know where it is going to go.

Sleaze Roxx: Why were you planning on doing a reunion with the original members? What prompted that?

Mark Knight: Because I think everybody kind of wanted to do it. You know, all the band members wanted to do it. Just for the hell of it! It wasn’t like we were going to, you know, go out — no big plans! My plan was just to get everybody together. Basically, 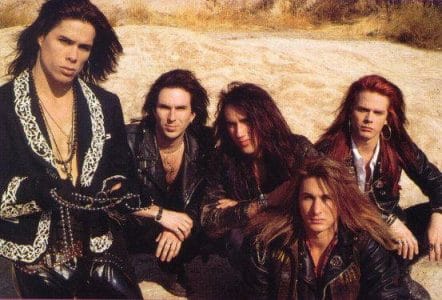 my plan was that we’ll go do a rehearsal and get everybody on the same room again together and see if we can get that far. And we couldn’t even get that far [laughs].

Mark Knight: [Laughs] Unfortunately! It was cool reaching out with Joe again. So you know, I felt like going down to see him and getting up onstage with him again. It’s like we didn’t miss a day. t had not played with him in ten years!

Mark Knight: I hadn’t even seen him in ten years!

Sleaze Roxx: Can you tell me the reasons why the reunion did not pan out?

Mark Knight: There were a lot of egos. There’s a lot of weird dynamics between the five members and some things just didn’t work out. Some people were just not seeing eye to eye on some of the plans that I had thought — that I had initiated with everybody. It just did not come across clear and It just did not work out.