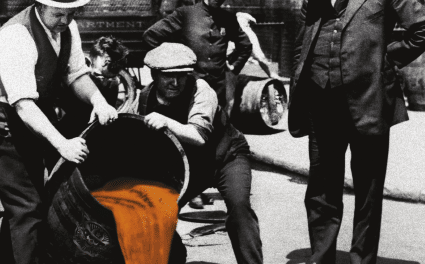 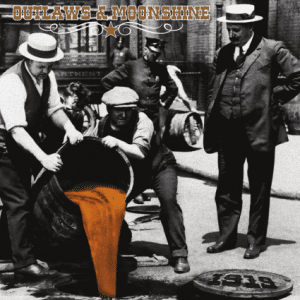 Outlaws & Moonshine are scheduled to release their debut EP 1919 via HighVolMusic on October 16, 2015.

A press release from HighVolMusic states in part: “Outlaw country infused with heavy guitars best describes Outlaws & Moonshine. As southern rock re-emerges, Outlaws & Moonshine have boldly stepped up to the stage with a new southern rock sound and [have already released] their first video-single ‘Whiskey’ [earlier in] 2015. The Indiana southern rock outfit comprised of vocalist/guitarist Beau Van, bassist Chris Van, guitarist/vocalist Mike Back, and drummer Eric Piper not only know where they are going but have a solid musical history that put them here today. By aligning their steadfast perseverance to the do-it-yourself work ethic, Outlaws & Moonshine have shaped their music by blending the past with the present, polishing their craft and perfecting their songs all while playing out regionally then expanding southward performing their music and gaining a fan base.”

Outlaws & Moonshine have completed work on their debut EP release titled 1919 which is described as “Chocked full of anthem like rhythm and blues, rock and soul and a melding pot of hook filled melodies; their signature sound comes from main songwriter Beau Van who crafts his songs after everyday life experiences. Beau’s unique approach is to use a balance of old school southern rock with a bit of today’s country rock and a whole lot of guitar. The end results are strong yet memorable songs that hook you in and could brand you as an Outlaws & Moonshine fan from first listen. Outlaws & Moonshine has a refreshing approach to their brand of music dubbing it as ‘New Southern Rock’. What separates Outlaws & Moonshine from the stagnant pool of current trends is their music first and foremost but also their ability to stay true to their craft, to themselves and to their roots in music.”