Big news for Prophets Of Addiction as the group has signed with HighVolMusic and will be releasing a new acoustic album Nothing But The Truth in the fall. The group has recently released the first video in support of the album for the track “American Dream.” 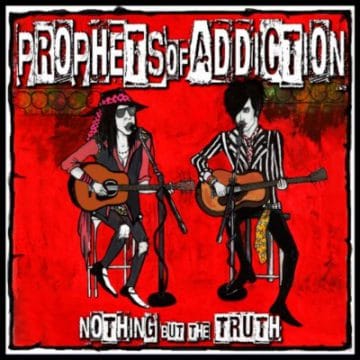 “HighVolMusic is pleased to announce Seattle/Hollywood glam punk-n-roll act, Prophets Of Addiction, has signed with the label for the release of their new album, “Nothing But The Truth”.

“I love the rawness of the band and have been a fan since they hit the scene. Lesli is the consummate professional and one of the hardest working guys in the business. I am happy to have him and G.G. as well as the rest of the band as part of the family.  This acoustic release is something special, and then we’re going to light things up with a brand new full-on electric opus! Big thanks to Alison at MBM Music for making the connection.” – Bill Chavis, Principal HVM

Sleaze Roxx stated the following in its review of Prophets Of Addiction‘s Babylon Boulevard album released back in 2010: “With equal parts of The Dogs D’amour, New York Dolls and slight ties to the Sunset Strip glam scene, The Prophets Of Addiction have released a respectable album. Babylon Boulevard as a whole may won’t immediately jump out at you — although Leeron and Rev(x)‘s riffing surely will — but it is one of those albums that slowly grows on you. Lesli Sanders may have ransacked his mother’s make-up drawer years back, but with his new band he proves that there is more to him than just image.”