“It’s with great sadness that I write this today. Y&T‘s original rhythm guitarist, Joey Alves, passed away at 7:10 this morning at the age of 63. He suffered from ulcerative colitis and other complications that led to his passing. Joey was one of the finest rock rhythm guitarists, and I’ll always remember playing next to him chunking out those monster chords with his classic red double cutaway ‘59 Les Paul Jr. As Ronnie Montrose once said about Joey, “There are rhythm players, then there’s Joey. A class of his own…..”.

He was a fun guy who always played with attitude and conviction, and was responsible for writing some memorable riffs for Y&T over the years. His friendship and presence will be missed. This is a great loss for all the Y&T family and faithful. He now joins Phil and Leonard in rock and roll heaven.

Wikipedia states the following (with slight edits) about Y&T during Alves‘ main time in the band from 1974 to 1989:

“Leonard Haze, Bob Gardner, and Wayne Stitzer had an unnamed band in Hayward, CA that played only cover tunes. Dave Meniketti joined as guitar player in 1973. Soon after, the band received a call for their first gig, but they needed a name. According to Meniketti and Haze, Leonard chose the name of the album that was playing on his turntable at that moment – “Yesterday and Today” – a compilation from The Beatles. The first lineup – which only played cover tunes (not original music) – consisted of Haze on drums, Stitzer on piano, Gardner on bass, and Meniketti on lead vocals and lead guitar. After Stitzer quit the group, Gardner switched from bass to rhythm guitar and piano, and Phil Kennemore was brought in to play bass. In 1974, Gardner left the group and was replaced by Joey Alves. The band, then, began writing original material . . . that is when the original Yesterday & Today lineup began. 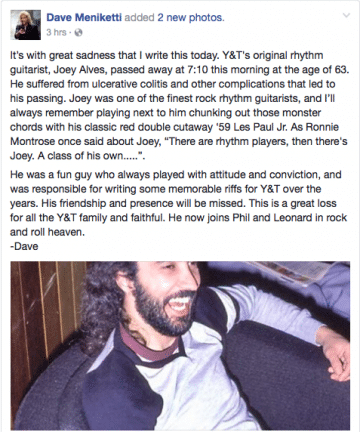 The band released their first two studio albums, their self-titled debut and Struck Down, through London Records in 1976 and 1978 respectively. They toured extensively, mainly as an opening act for bands such as “Wild Cherry“, and others. As Dave Meniketti has said in numerous radio, television, and magazine interviews over the past four decades, that a new record deal in 1980 with A&M Records prompted the band to shorten their moniker to simply Y&T, as influenced by their encores where fans would chant “Y&T, Y&T, Y&T.”

Y&T‘s sixth studio album, In Rock We Trust, released in 1984, became the band’s highest charting and selling album, reaching No. 46 on the Billboard 200. The album produced Y&T‘s first big radio hit “Don’t Stop Runnin’ “; the rights to “She’s A Liar” were purchased by Dr Pepper and used in an ad campaign. To date, In Rock We Trust has sold over 450,000 copies. This album was the only Y&T album to chart in Canada, reaching No. 77 on the RPM chart.

The band’s 1985 hit “Summertime Girls”, off their album Down for the Count, became the band’s highest charting hit to date, reaching No. 55 on the Billboard Hot 100 and No. 17 on the U.S. mainstream rock charts. It received tremendous airplay worldwide, played frequently in the Baywatch television series, is featured in several feature films, received heavy rotation on MTV as well as MTV’s top video playlists, and gets regular airplay today on classic rock radio stations throughout the United States.

Joey Alves on upcoming Y&T documentary On With The Show:

I saw this clip of Joey 2 days ago when I was reviewing part of the documentary. Seeing Joey on the screen while knowing he was not long for this earth was a shock to me at first, but hearing what he said in this clip really touched me.

Taken from “Contagious”, the eighth studio album by American hard rock / heavy metal band Y&T, released in 1987 through Geffen Records, which, like their previous label A&M Records, is now a subsidiary of Interscope Records (itself owned by Universal Music Group).