History was made on April 1, 2016 when Guns N’ Roses featuring singer Axl Rose, guitarist Slash and bassist Duff McKagan played live together for the first time since 1993. Rounding out the line-up at the inaugural gig at the Troubadour in West Hollywood, California, USA were guitarist Richard Fortus, keyboardist Dizzy Reed and drummer Frank Ferrer. Alternative Nation also reported that a female keyboardist by the name of Melissa Reese played with the band at the Troubadour as the second keyboardist instead of Chris Pitman. 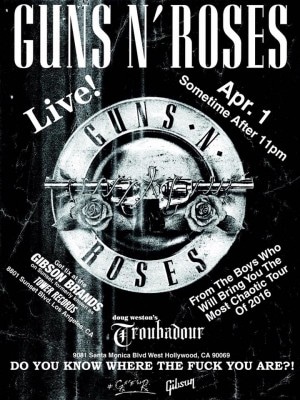 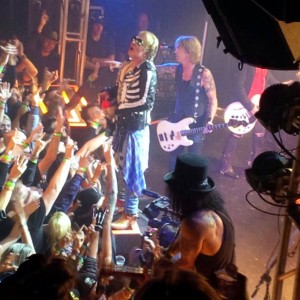 Sleaze Roxx conducted an interview with Femme Fatale‘s Lorraine Lewis earlier on April 1, 2016 before the Guns N’ Roses‘ gig at the Troubadour and you could feel the excitement in Lewis‘ voice as she started talking about GNR‘s upcoming show: “When I went to LA to get a record deal, I worked at Tower Records — so right there on Sunset. So I am really feeling nostalgic and I actually saw Guns N’ Roses for the first time at the Troubadour and that’s where they’re playing tonight! There is just like a buzz in the air. It feels good to be in LA.” Lewis was asked when she found out that the Troubadour gig was confirmed to which she replied, “Well, Courtney Cox who plays guitar for Femme, she’s been posting stuff and I actually saw online last night. I thought ‘What the fuck is she doing in line at some show?” Because Courtney can get in to any show anytime anywhere. So I was like, ‘Where can she possibly be that she is having to camp put to get in line for something?’ So I sort of just kept watching and then finally she said, ‘Yeah. I am at the Troubadour — I mean, I’m sorry — at Tower Records, waiting for Guns N’ Roses tickets.’ And I am like ‘No way!’ Then I went to the website and it’s like, the rumour is it’s like an April Fool’s joke but it’s for real! And then she just posted wrist bands pictures. They got ’em! So they are totally in! Pretty cool! 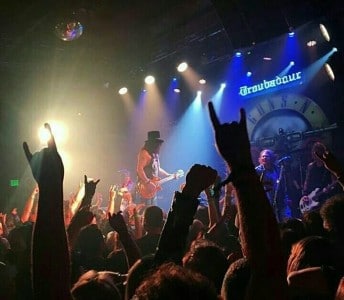 Lewis went on to add, “Like I say, I am feeling totally nostalgic. I mean, moving to Los Angeles and the buzz on the Sunset Strip. I am kind of you know, buzzing. I definitely had a lot of coffee but I am totally feeling like this just cool energy because those times were so fucking great! I feel so fortunate that I was able to be a part of that Sunset Strip vibe and all of that so I’m stoked for Guns N’ Roses! It’s about time and i am really hoping that Steven Adler will be playing drums with them because it then makes it really over the top! They have been releasing rumours about the drum sticks. Whoever is playing drums — they have released the name of the brand of drum sticks and apparently Matt Sorum and whoever else — I can’t remember the other guy’s name that usually plays for Guns N’ Roses [Frank Ferrer] but both of them have said, ‘This is not the brand that I use.’ So the speculation is that Steven Adler will be there as well so it’s really a cool day in Hollywood!’

The first part of the two part interview with Femme Fatale’s Lorraine Lewis will likely be published on Sleaze Roxx in the coming days.

Guns N’ Roses have also released their tour dates for their aptly named “Not In This Lifetime” tour across North America. More dates are expected to be announced with The Cult rumoured to open for Guns N’ Roses during some dates outside of North America.

Of note, there is a big gap between April 23, 2016 and June 23, 2016 which would be more than enough time for Axl Rose to sing for AC/DC if the latter group was able to reschedule their 10 date North American tour during that time span.